Impact of a war…

The War of 1812 decimated Niagara. The Town of Niagara on the Lake was virtually burnt to the ground and similar depredation occurred throughout the region. As a result, houses that survived intact both the War and the following 200 years are lamentably few. Due to the historical importance of these survivors, each is profiled in the following pages. 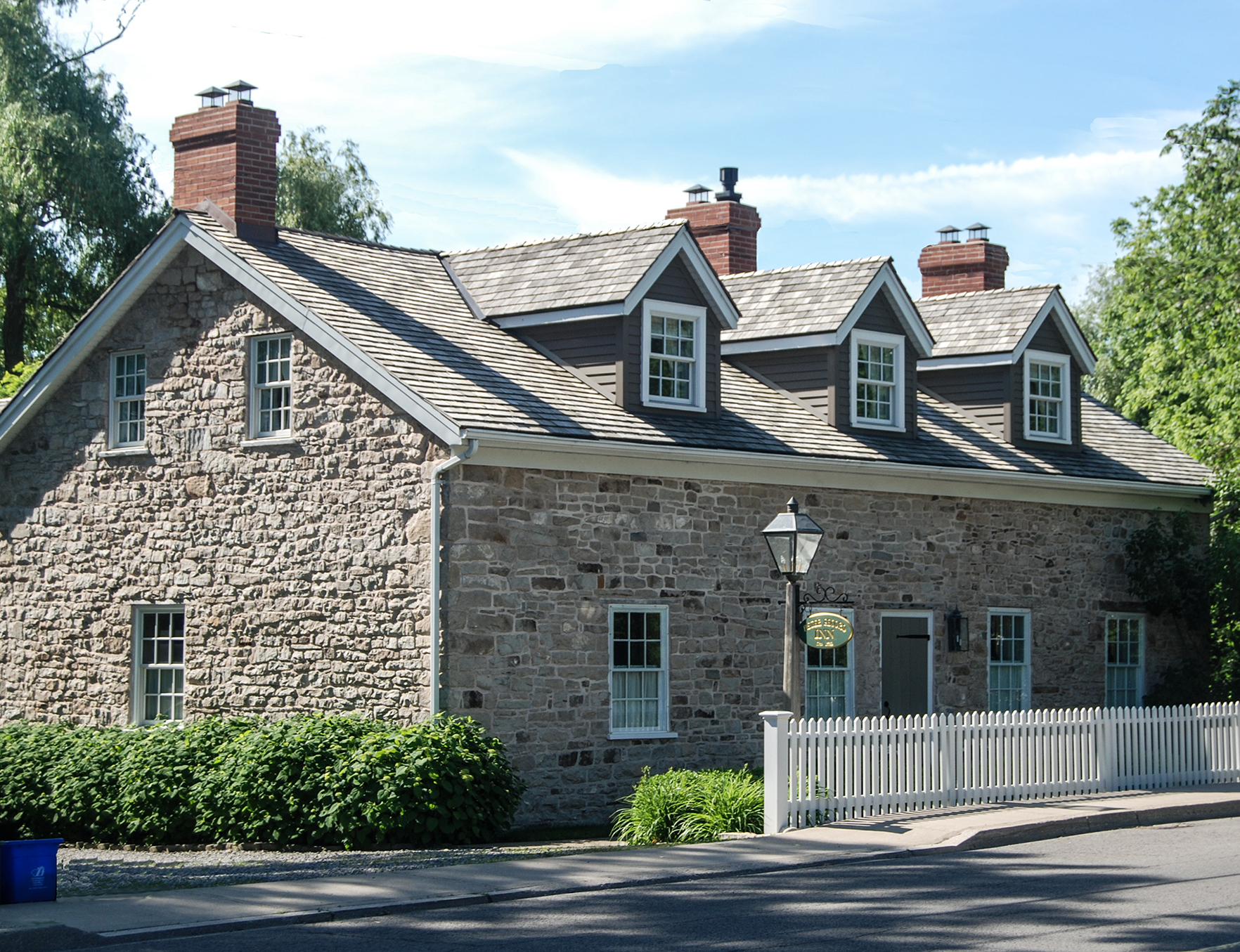 In 1777, at 51 years old, Empire Loyalist Peter Secord joined Butler’s Rangers; leaving the Mohawk Valley to move north to their base in Niagara. Late in 1779, the injured and older members of the Rangers were offered the chance to settle as tenants of the Crown in the vicinity of current day St. David’s. Peter began farming in 1780. Local tradition suggests this house was built in 3 sections; the original house in 1782, an in-line addition in the late 1780’s, then the rear extension in the 1880’s. Location of the 3 chimneys & asymmetrical placement of the facade window openings suggests this may have validity. Its 2’ thick local found stone walls support hand-hewn oak beams with mortice & tendon framing joinery throughout. In the 1780’s, the windows would almost certainly have been small paned 12/12 rather than the current 6/6 style. The simple plank door anchors this splendid Loyalist settler's home. 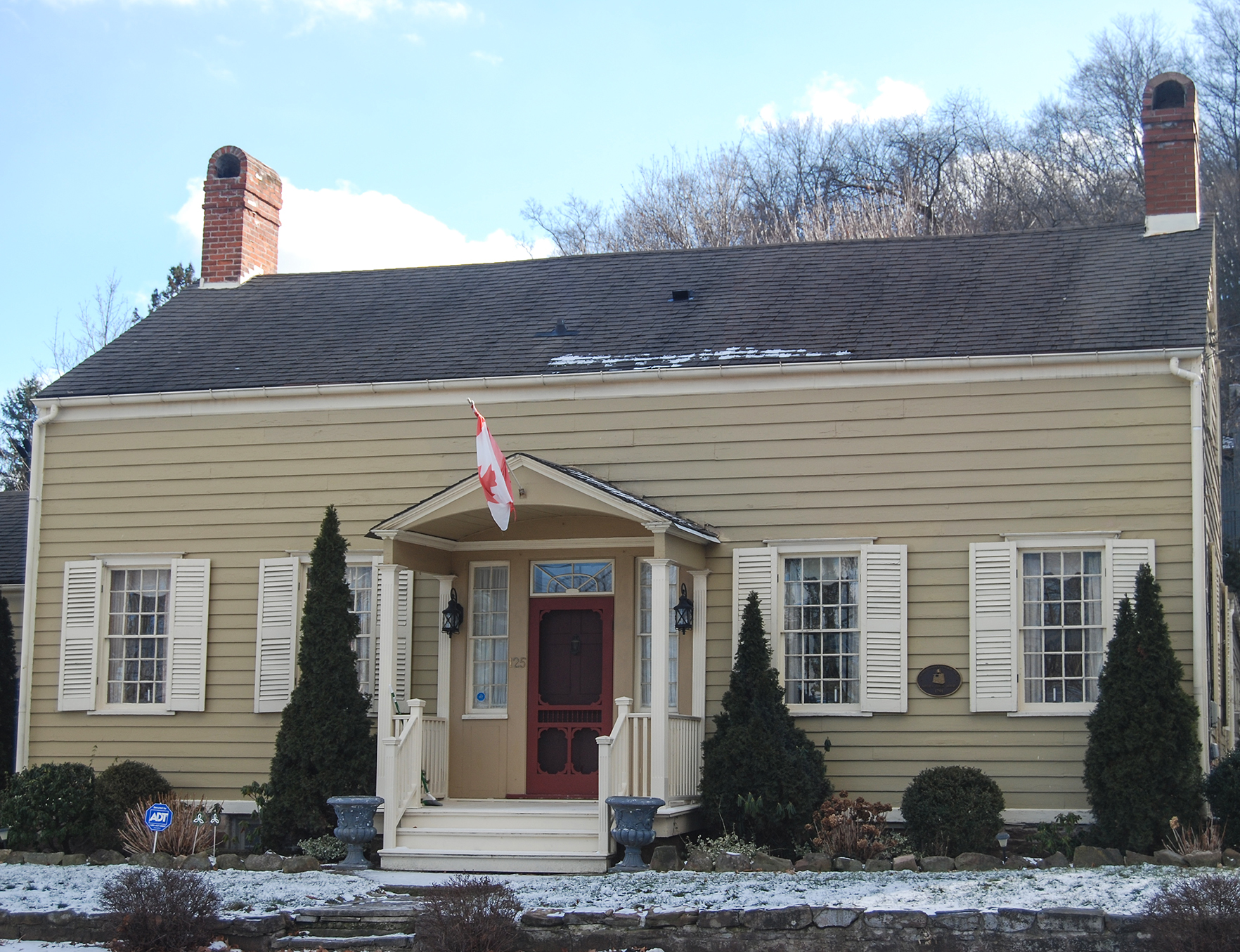 Driven from the Mohawk Valley of New York after the Revolution, the Nelles family arrived in Niagara. Their close relationship with the Iroquois and service to the Crown granted (facilitated by Joseph Brant) them 4254 acres of land. Robert Nelles’ share was 600 acres on Forty Mile Creek that included the site of current day Grimsby. The house was built between 1787 (rear) & 1791 (front) as a ’temporary’ residence until the construction of Nelles Manor was completed. A basic Georgian 5 bay side-gable design with end placed chimneys, the house is timber-framed and sheathed with clapboard. Consistent with the period, the windows are 12/12 double-hung, with simple understated drip moulds. While sympathetic, the porch and transom style are unlikely to be original; however, the two windows flanking the door may have been (see Field House & John Brown House following). 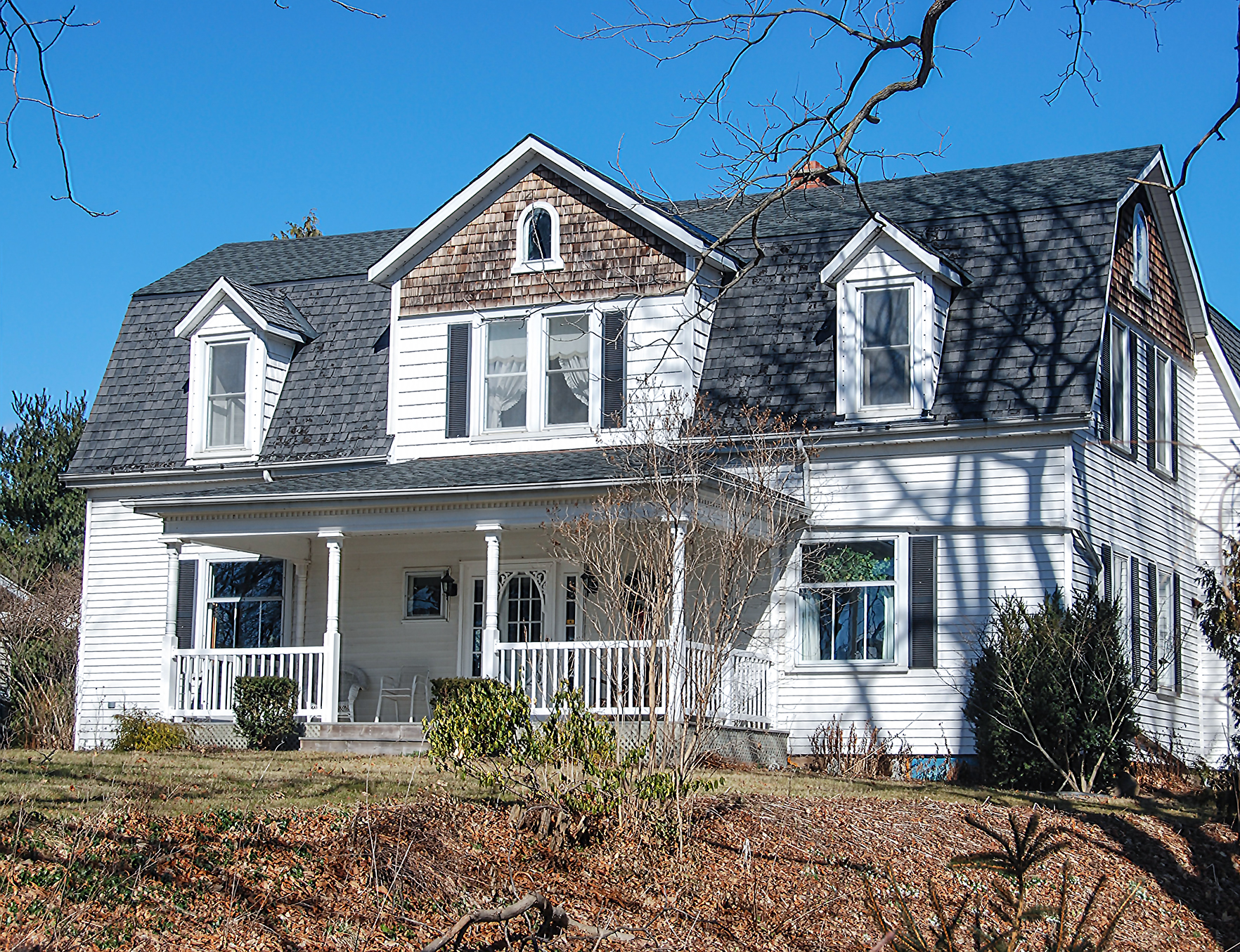 Frederick Schram was born in Green County, Province of New York in 1746. He declared Loyalist during the Revolution and joined Butler’s Rangers where he served as a Corporal until mustering out in the 1780’s. In recognition of his service, the Crown granted him 400 acres in Louth Township on which he built a home in the tradition of his birthplace in the Hudson River Valley (N.Y.). If original, the high gambrel roof and the tall, narrow dormer windows are hallmarks of the Dutch Colonial. The centre gable, while not unknown in Dutch Colonials of this period, would be very uncommon. Records indicate that the house was renovated in the 1870’s, at which point this gable may have replaced a third dormer. Hudson River Valley Research indicates that a porch (same or similar to existing) may have been an original feature. Should the Dutch Colonial style be original, this house is a very rare (in Canada) period example. 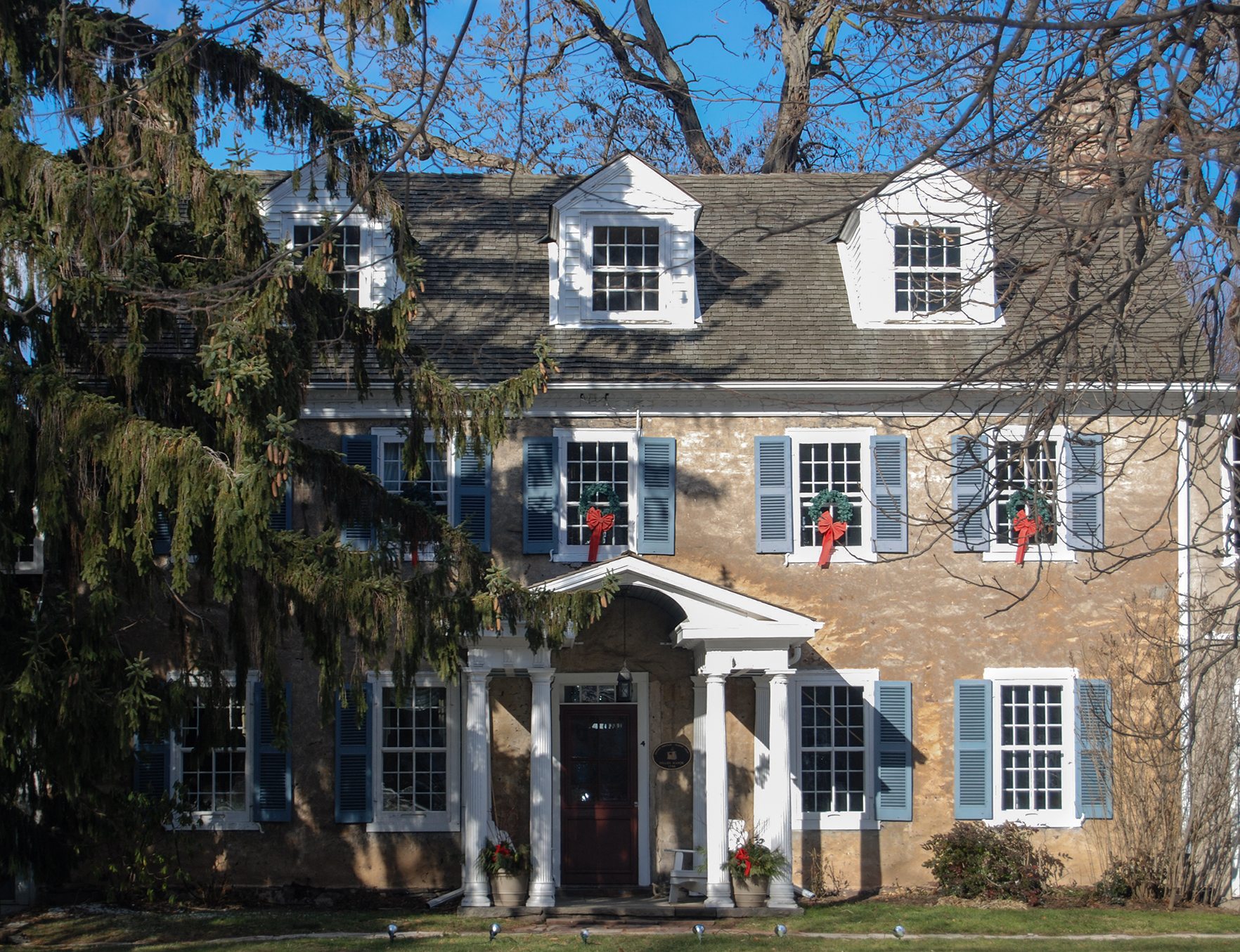 Living in the Nelles-Fitch House while the Manor was built, Colonel Robert Nelles diversified the wealth derived from his 600 acres and sundry ‘compensation for losses & loyalty to the Crown’, by building mills and a store. It took 10 years to complete this classic 5 bay, 2-1/2 storey, end-gabled Georgian house. Its sandstone walls are 3’ thick & finished with mortar rendering. All the windows are double-hung; the lower course 12/12’s, upper course are 12/8, & the dormer windows 8/8. The cornice with its decorated frieze is more richly embellished than normal for a staid Niagara Georgian; more typical of the American Federal style popular in the US during this time period. The portico, with its broken pedimented roof supported by slender columns & pilasters, is almost certainly Federalist inspired. The six panel door & its 5 pane transom is a purely Georgian element. 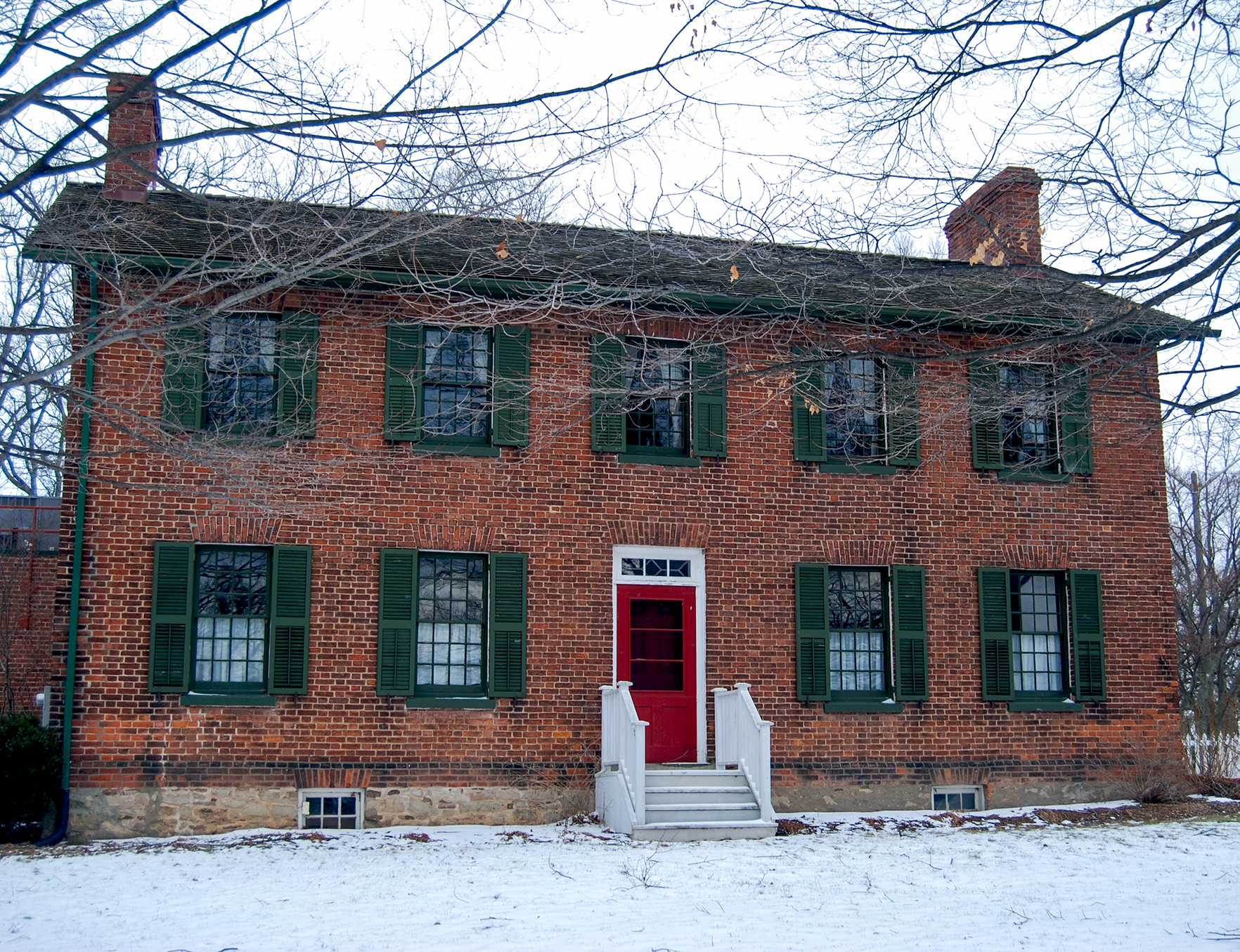 Every house has a story. Occasionally, the story elevates a classic architectural example into a window on history.

In 1793, John McFarland immigrated to Niagara. Here, on 600 acres granted for his ~35 year service as a boat-builder to the Crown, the 50 year old McFarland created a thriving farm & prosperous brick making business. By 1800, with bricks of his own manufacture laid 5 wythes thick, he built this classic Georgian house as a symbol of his success. While the house survived the War of 1812, neither it nor John escaped unscathed. In 1813, US forces took the home as a field hospital, while McFarland was led away in chains. At the end of the war, John returned to find a hollowed-out shell of his once grand house; the Americans had used anything combustible (orchards, mantles, trim, etc.) as fuel for heating, leaving the house and farm laid waste. While John did not survive to see the house restored, his children returned it to its former glory, and his descendants were housed under its roof for the next 140 years. 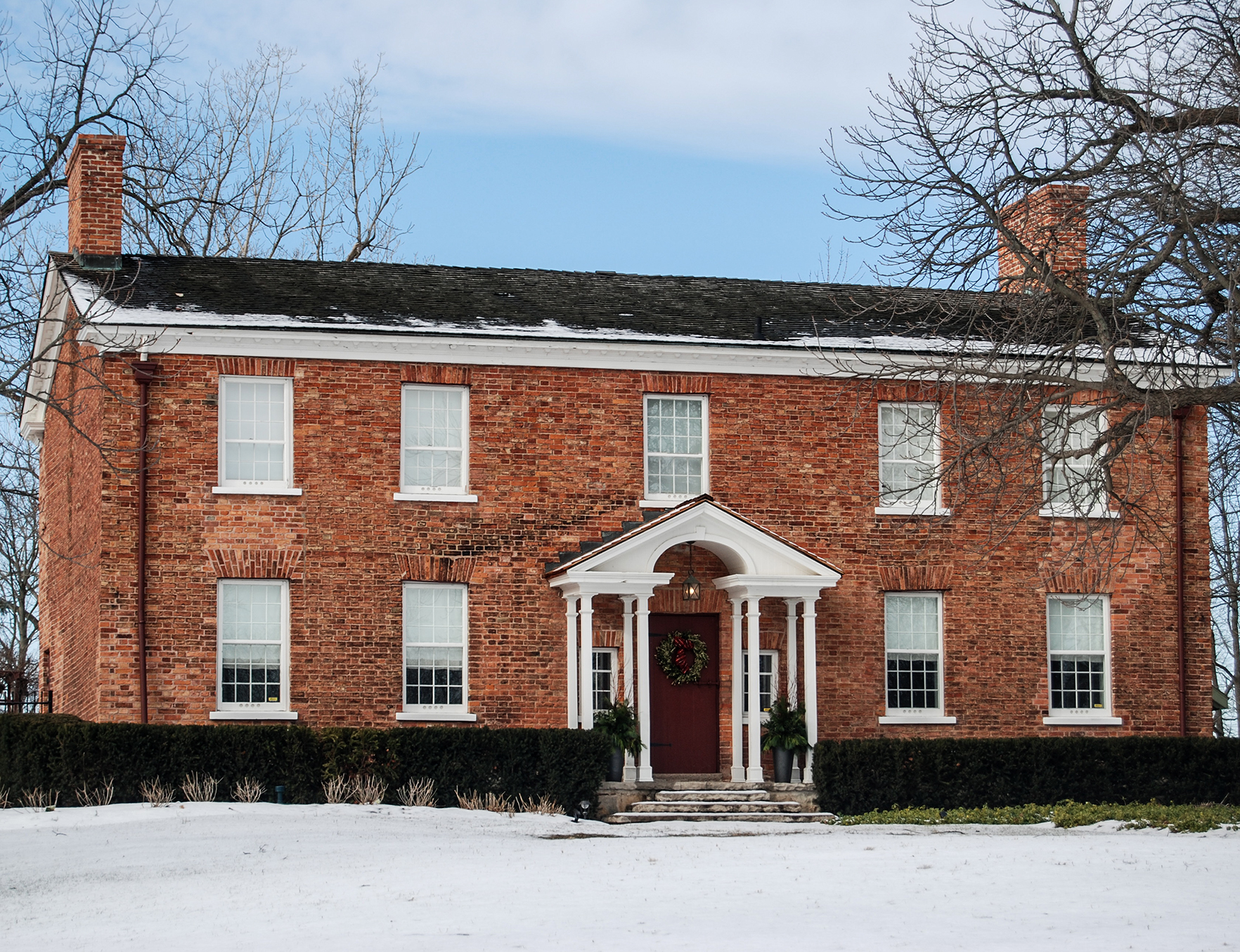 Accused of traitorous activities, George Field & his family were forced to flee Pennsylvania. In 1778, he, and subsequently his sons, joined Butler’s Rangers. After his death in 1785, the heir, Gilbert (also a veteran of the Rangers) petitioned the Crown & was granted lands between 1794 & 1798 totalling ~306 acres. There, Gilbert Field (who from 1792 owned Niagara’s first inn), built a fine Georgian home which managed to survive the War of 1812 relatively unscathed (although purportedly hit by 5 cannonballs). The classic symmetrical 5 bay, Flemish-bond brick design is complemented with windows set to either side of the entry door indicating the success of its owner. A late 1950’s fire initiated a restoration effort on the home, and may have included the replacement of a Greek Revival porch (see image below) with the current sympathetic portico shown in this photo. 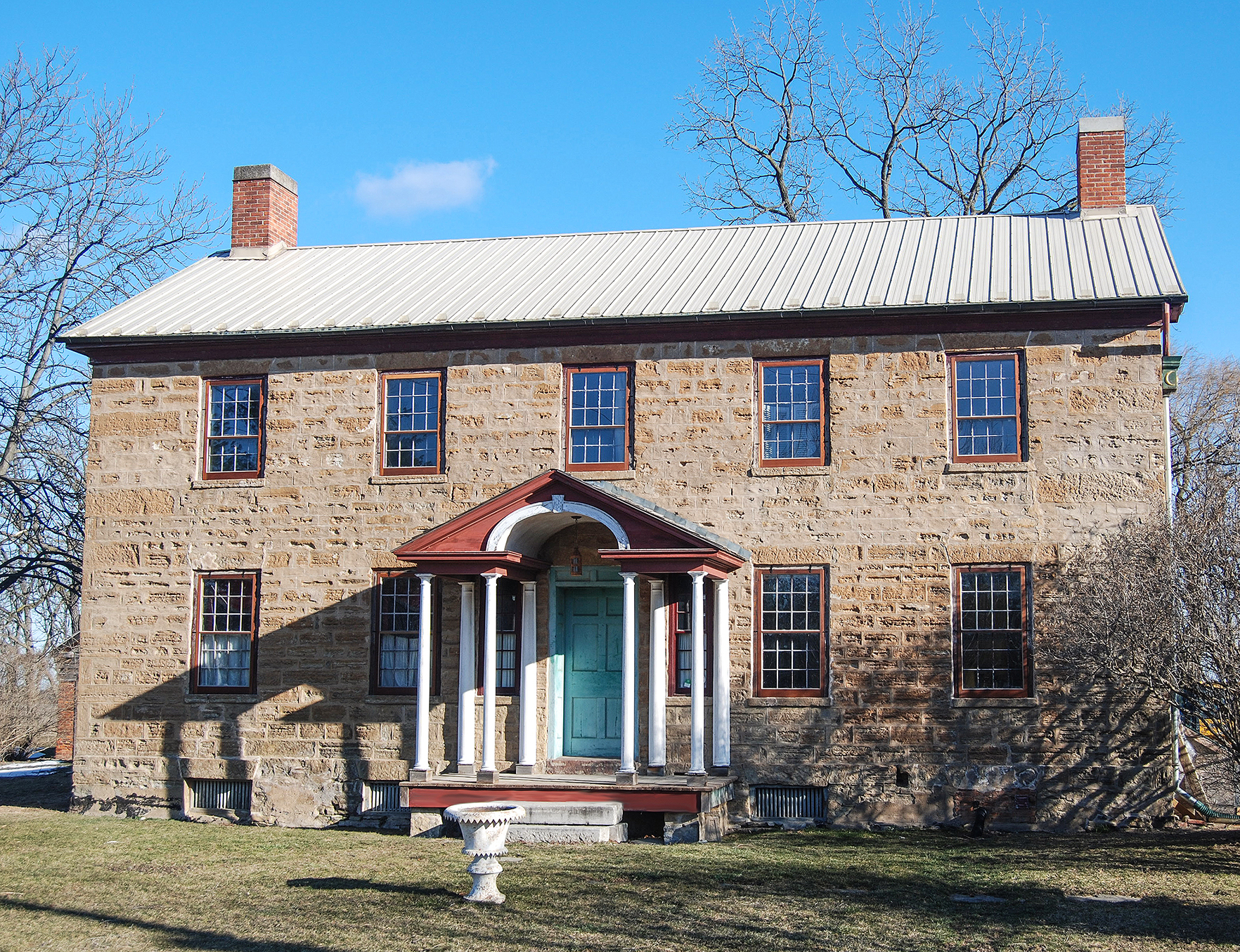 Born in the Province of New York, John Brown declared Loyalist, joining Butler’s Rangers & subsequently relocating his family to Fort Niagara in 1781. His petition to the Crown for loyal service and losses, resulted in a land grant of ~900 acres on which circa 1796 he built a homestead. Work began on the main Georgian-styled house around 1802 and by 1804 it was finished, incorporating the homestead into its rear section. Both homestead & main house are constructed of local found limestone dressed and laid in loose courses by highly skilled stone mason(s). The 5 bay facade, with 12/12 lower windows, 12/8 upper windows & 6/6 foyer lights (either side of the 6 panel entry door), shows evidence of lime rendering with incised lines between the rubble stone courses creating the impression of ashlar stone. Based on the Georgian style and historical New York precedents of similar stone homes which present an impressive uninterrupted facade, the portico with its slender columns, pilasters & broken pediment may not be an original feature. 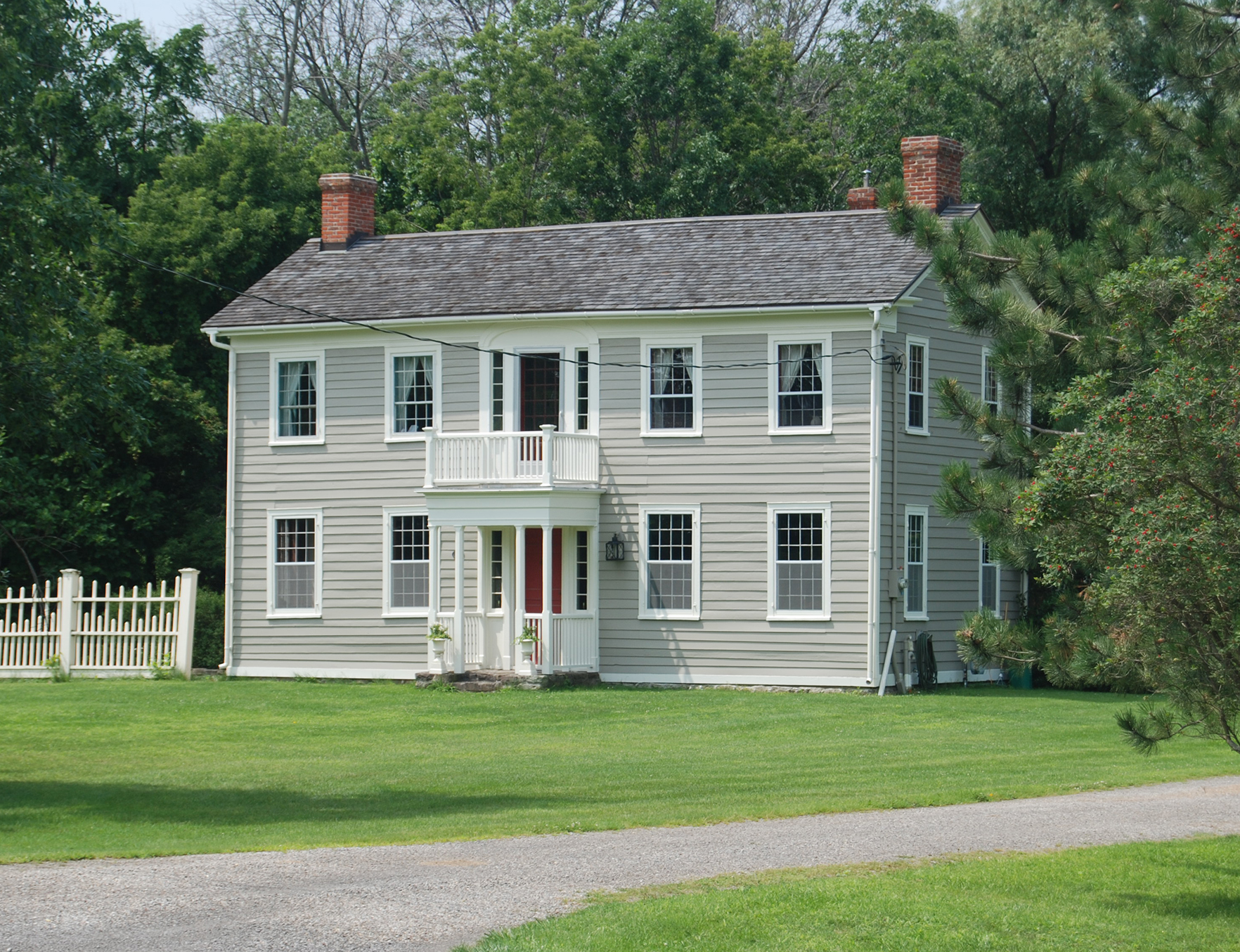 Built in 1805 by Butler’s Rangers veteran James Clement, this home narrowly escaped destruction during the War. In oral tradition, American troops found a pregnant Catherine Clement surrounded by her children, and in a rare display of compassion, spared the house. Whether truth or tale, the +200 year old home is a beautiful Georgian expression: a symmetrical 5 bay design set with 12/12 windows on the main and 12/8’s on the second, interior end gable wall chimneys, and simple eave/window moldings echoing the shadow lines of the clapboard & corner boards. Distinct from most period Georgians, the central bay of the house includes a portico over the main entry with a balcony serviced by a side-lit door that largely duplicates the main entryway. If original, it’s a rare element taken from the US Federal style. If not, it would have been a later 19th Century renovation to the facade. In either case, the repeat of the door form & sidelights provides a vertical continuity on the overall facade which can only be described as “classic”. 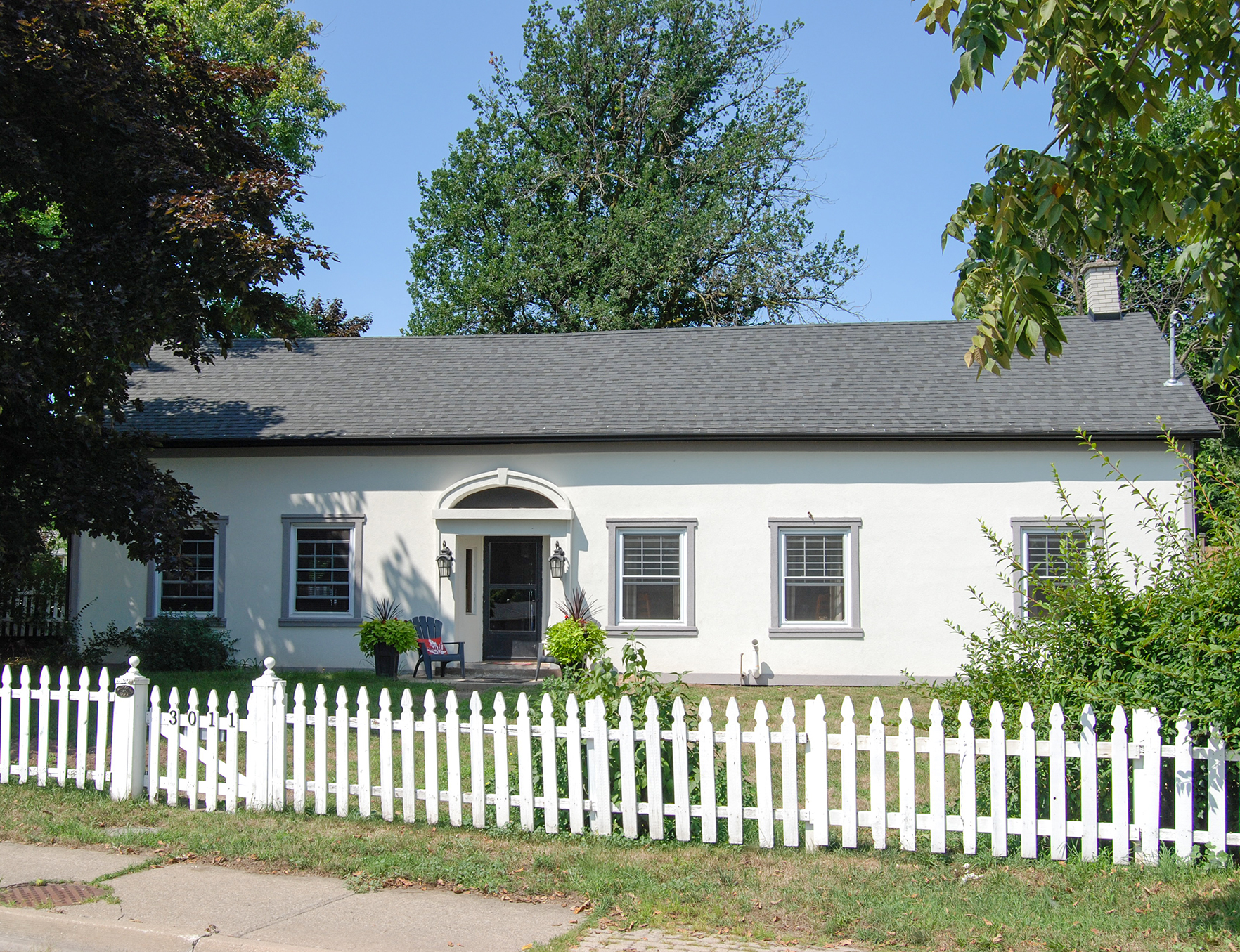 Andrew Rorback, originally from New Jersey, settled in Niagara and constructed this 1 ½ storey dwelling in the Georgian-based style favoured by Loyalist immigrants. This home also housed his business (a general store and saddlery) and was likely divided internally with business activities at one end and living accommodations at the other end. While the style of the building was common in Upper Canada, its plaster and lathe construction was fairly rare. Evolved from the ancient wattle & daub technique, this construction method began with a post and beam timberframe, then the exterior of the frame was horizontally sheathed with gapped boards which were subsequently covered by several layers of lime render (although at the time referred to as “plaster”, calling it “stucco” is equally accurate) to make the wall weather-tight. Next, the space between the timbers was infilled, occasionally with more plaster & lathe, and finally, the interior was sheathed with lathe on which horsehair plaster was applied. Generally, the plaster & lathe construction method was used in North America prior to 1820 and the Whirlpool House is one of very few surviving Canadian period examples. While over the last 200 years, the end chimneys (see inset photo) & original windows have been lost and the exterior covered with a modern stucco finish, the heritage of this house still shines through.

Or, you may make a selection from the Menu; or, click on a decade in the Timeline to visit a style popular in that period; or, choose another of our Main Sections from the following...