The Heirloom Guide & the Author

Canada has a rich, and in many cases unique, architectural heritage.

While there is a perennial and on-going debate regarding what is quintessentially Canadian, there is a common consensus on one point: Canada embodies the art of compromise. Since before our founding as a nation, Canadians have had both opportunity and motivation to consider the available options, select what we feel to be the best of each and then bring those elements together in a unique expression. As one might expect, the homes Canadians built tended to reflect the societal inclination to merge elements from several sources; often to the point (particularly in the 19th & early 20th centuries) where it becomes challenging to identify a house as a particular architectural style.

Brian Marshall, the principal author of the Guide, became enamored with architecture as a child playing with toy soldiers on the staircase of the Gothic Revival home his great-grandfather had built. He says:

“I remember walking through the neighbourhood of early 20th century houses that had grown up around my Great-grandparents’ house. At first glimpse, the house stood out like a queen surrounded by her subjects. Invariably my grandfather would say that the home of his youth had started out life as a timber-frame for a barn, but his mother (having delivered 10 children and pregnant with the 11th) suggested that if the barn was built before her new house her husband could sleep in that barn. My great-grandfather (very wisely) immediately altered his plans and a classic Gothic Revival home was formed around the timber-frame. Stepping onto the porch was like stepping back in time… you could feel the spirit of those who had walked there before. Not only my family, but the echoes of all the people whose lives had been entwined with this house. Even as a child, this was a life-altering epiphany: A house with the ‘right’ design could become more than simply shelter, it could foster and enrich a community for generations.”

Over the years, Brian has led a successful and (some might say) eclectic work life; but there was always one constant: a love of the ‘right’ design. In 2005, after suffering a health crisis, he attempted retirement but found himself “constitutionally unsuited” to that life-style. Searching for a pursuit which might ‘pay-it-forward’, Brian became a licensed real estate professional with a twist: he would find a house with good ‘bones’ and then design a renovation which would create both the right space for his clients while also providing them with instant equity in their new home. Interestingly, the majority of his clients have not ‘cashed-in’ that equity, preferring to remain in a home that “fits them so well”.

In 2015, Brian moved to Niagara-on-the-Lake, Canada. Amongst the vineyards, orchards, and bucolic landscapes that surrounded him, he found a 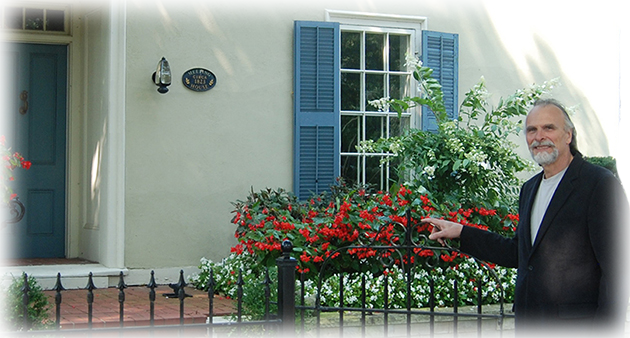 Currently, Brian splits his time between assisting people to find the 'right' home in the Niagara Region, consulting on Canadian Architectural heritage through his company Northwind Design and continuing to expand the Heirloom Guide. “When I go down to Old Town, visit a winery, pick up some fruit from a local organic grower, or simply head out for a ‘mental health break’ drive, I am continually confronted with significant Canadian residential architecture that belongs in the Guide… It appears I may have committed to a project that could continue to evolve for years!”