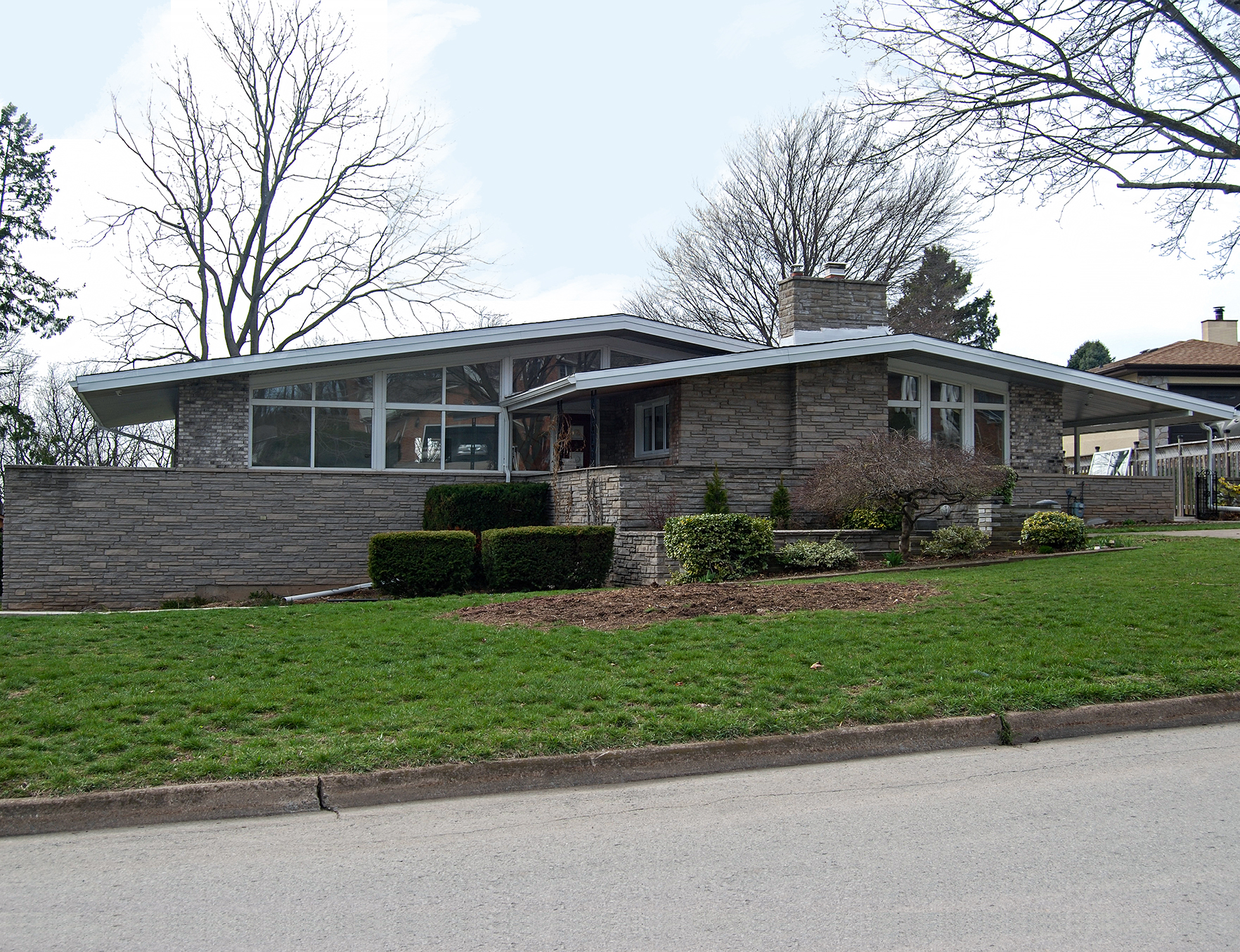 Similar to the ‘high’ modernist International style, the Contemporary was designed from the inside out and utilized many new products such as plate glass and engineered wood to create its ‘soft’ modernist form. Inspired by Wright’s Usonian houses and his treatises on affordable home design that related to the landscape, this style was initially popularized by J. Eichler in California. Common elements include a low-pitched or flat roof with wide overhanging eaves; windows to, or just below, the roof line; recessed or obscured asymmetrically placed entry; horizontal, ground-hugging lines; warm material use such as stone, brick or wood; and a low, broad chimney. This front-gabled example, in the L-shape-with-carport footprint favoured by Wright, has an ’Eichler roof’ that showcases pyramidal plate glass windows giving onto defined exterior living spaces. 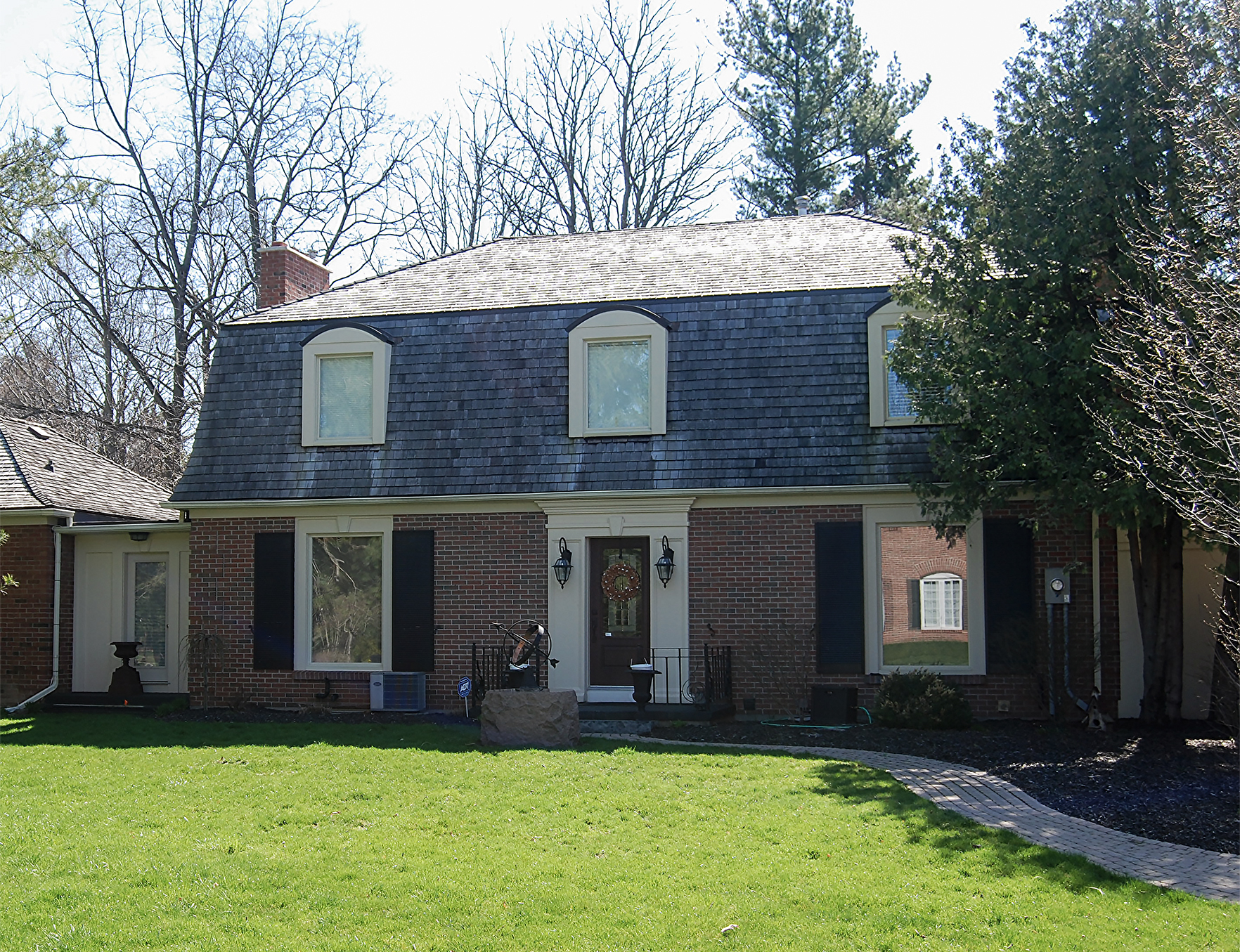 Hearkening back to the Second Empire Style, the Mansard was the “formal” home during a time when the informal Ranch and Contemporary designs dominated. The Mansard roof can accommodate a full height ‘attic’ living space, so an architect or builder could ‘sneak’ a 2 storey home into developments with single storey zoning requirements. Additionally, the cost of building a Mansard is notably less than a comparable standard 2 storey since the brick veneer stops at the 1st storey and is replaced by less expensive roofing materials above, making it attractive to both builder and buyer. Typically, and particularly after 1965, round-arched dormer windows are set into the lower roof slope. While double entry doors under a segmental or round arch are most common, the single squared door entry with a decorative surround (as in this example) is found in more traditional settings or sub-divisions. 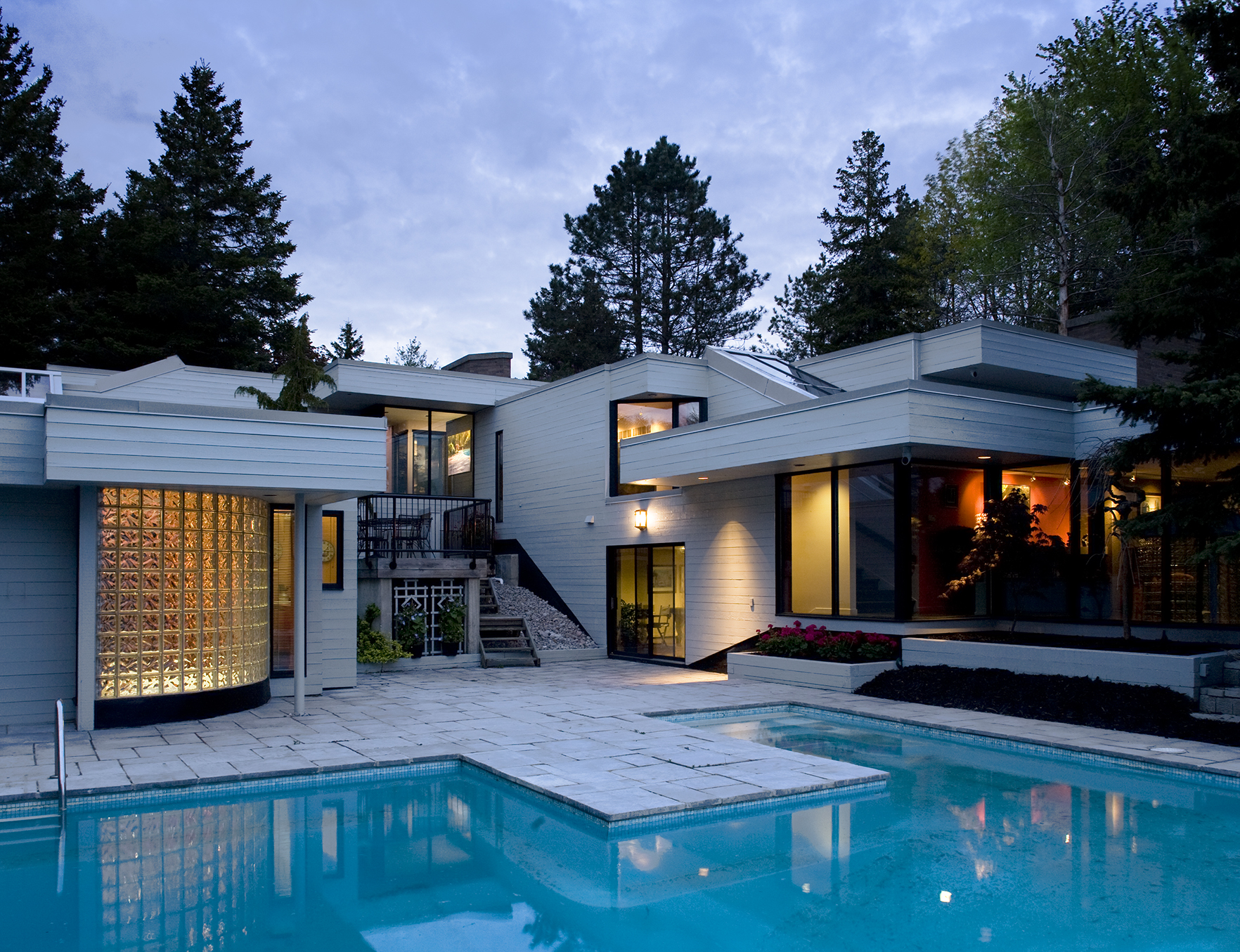 The main tenet of Organic: Carefully study the site, landscape and natural features, then create a design that grows from within, integrating site and house into one harmonious whole. The exterior typically displays geometries that echo native elements of the site and are often clad with natural materials. Seamless interior/exterior transitions are common (image below right), as is a floor plan that incorporates views, whether planned or found. The example, designed by Ron Thom, sits on a steeply sloped lot (35˚ to 45˚) and transitions through 5 interior levels. The front facade (image below left) is a virtual extension of the landscape, while the west walls feature extensive use of full-height windows under deep overhangs. It’s clad in flush-board cedar though the unfortunate choice by an owner to paint the original naturally silvered cedar detracts from the full organic harmony achieved pre-paint. 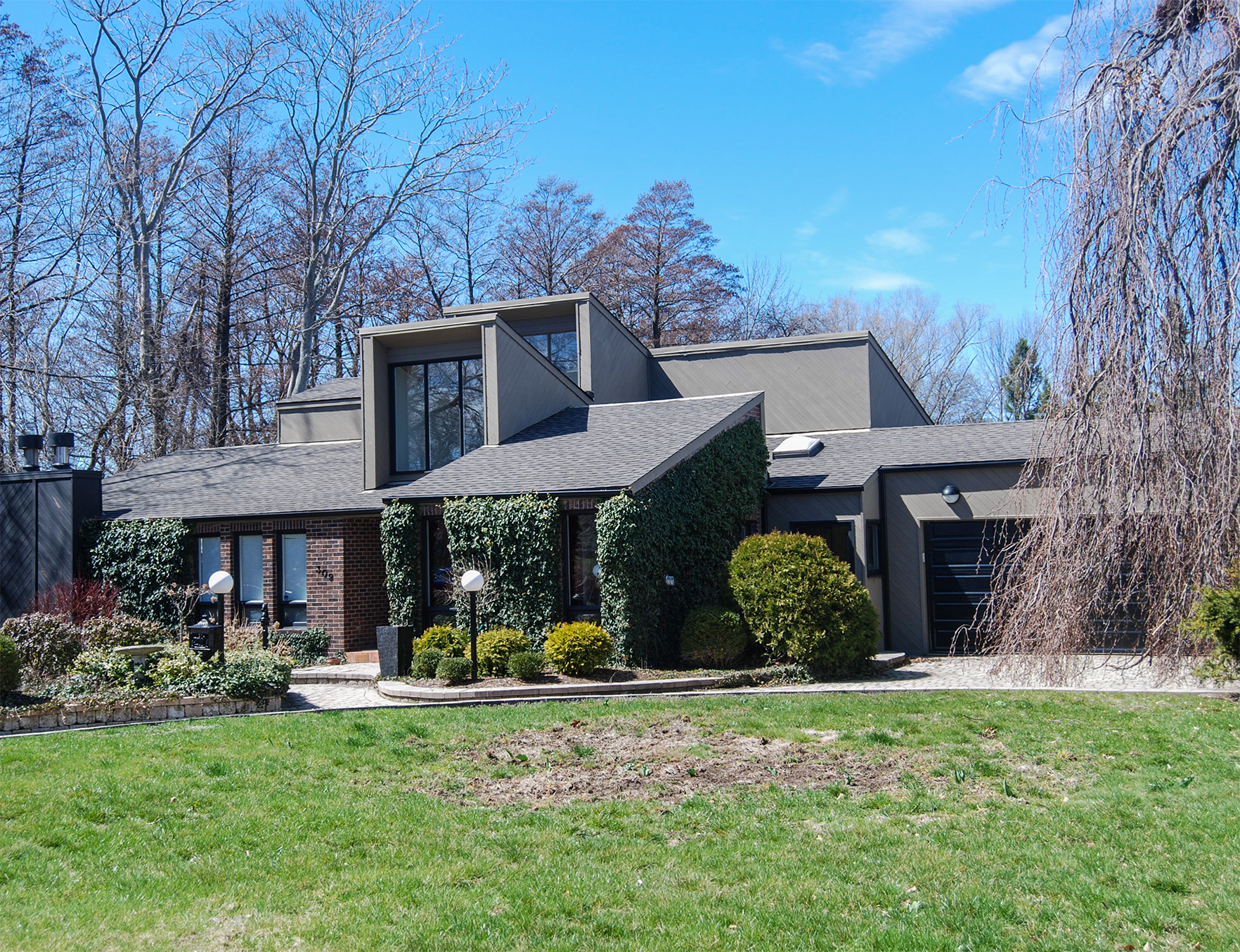 In 1963/64, the “Shed” galvanized the imagination of young architects by its use in what was perhaps the earliest ecologically-based housing development - Sea Ranch in California. The interplay between typically multi-directional shed roof elements is striking; the strong diagonal lines leave a lasting impression. The entry is usually recessed or obscured. Lower windows are often 2 part: a tall narrow fixed upper and a short lower opener. Any chimney is simple, rectangular and wood-clad with extended metal flues. This example, with its complex 4-part massing and one shortened end gable (seen top left), has substituted reverse pitched shed dormer elements for the more common clerestory window ribbon. The house’s diagonally installed wood cladding is typical of this style, however the brick veneer on the lower facade is only occasionally seen. 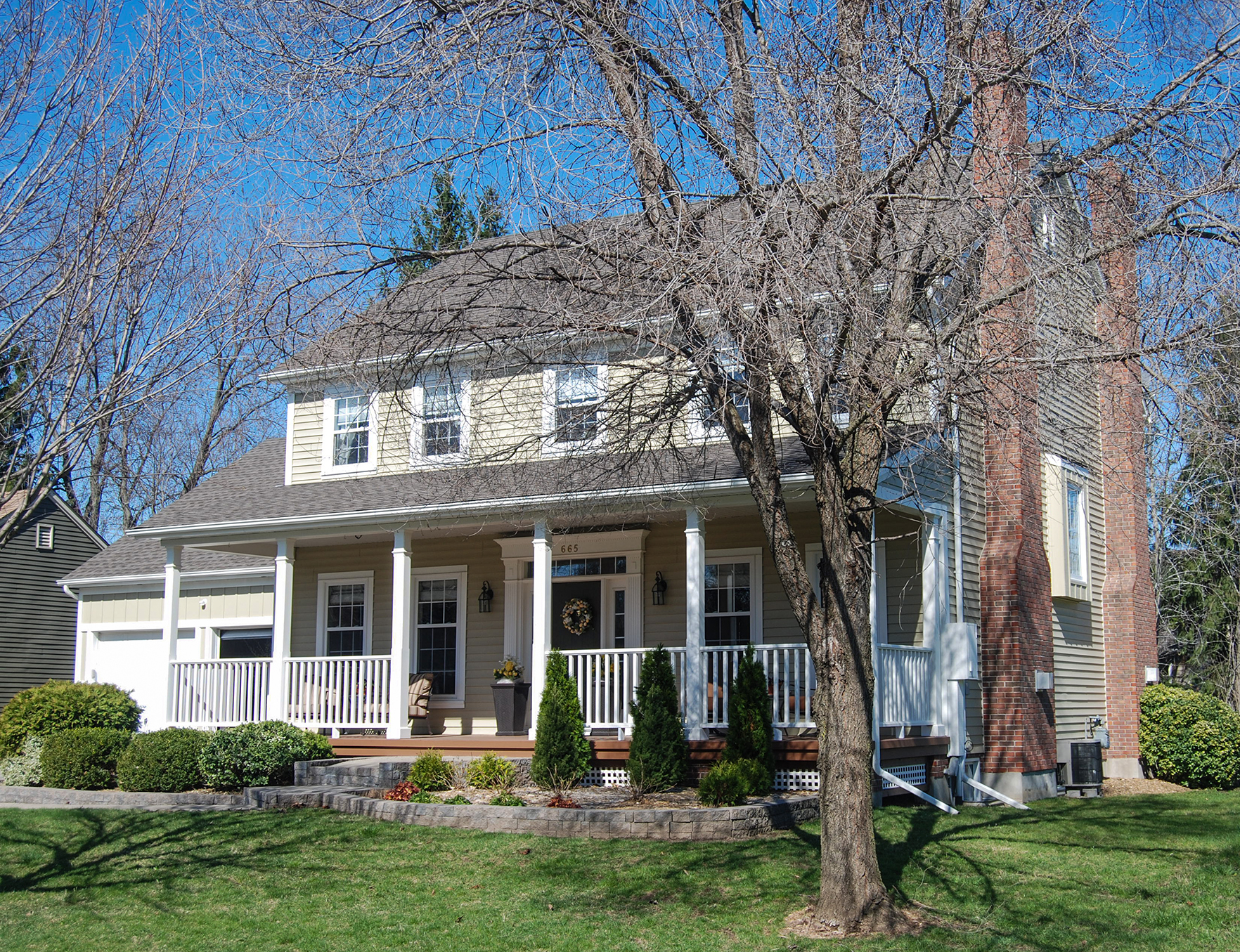 Original vernacular homes, also referred to as ‘Folk Houses’, were typically built by settlers or individuals with limited resources using locally produced products, made-on-site (pit-sawn boards, etc.) and/or ‘found’ materials (e.g. stone). These houses were often rough approximations of either the European homes they had grown up surrounded by, or the popular design style of-the-day. In the 1930’s, some architects began to design quiet, understated homes that recalled the ’folk’ tradition. By the latter part of the 20th century, this style often focussed on reflecting the architectural tradition of the region in which the home was built. One common element of New Vernacular homes is a large ’usable’ porch; typically with clean lines and minimal decorative elements. The windows are usually double-hung with simple frames. 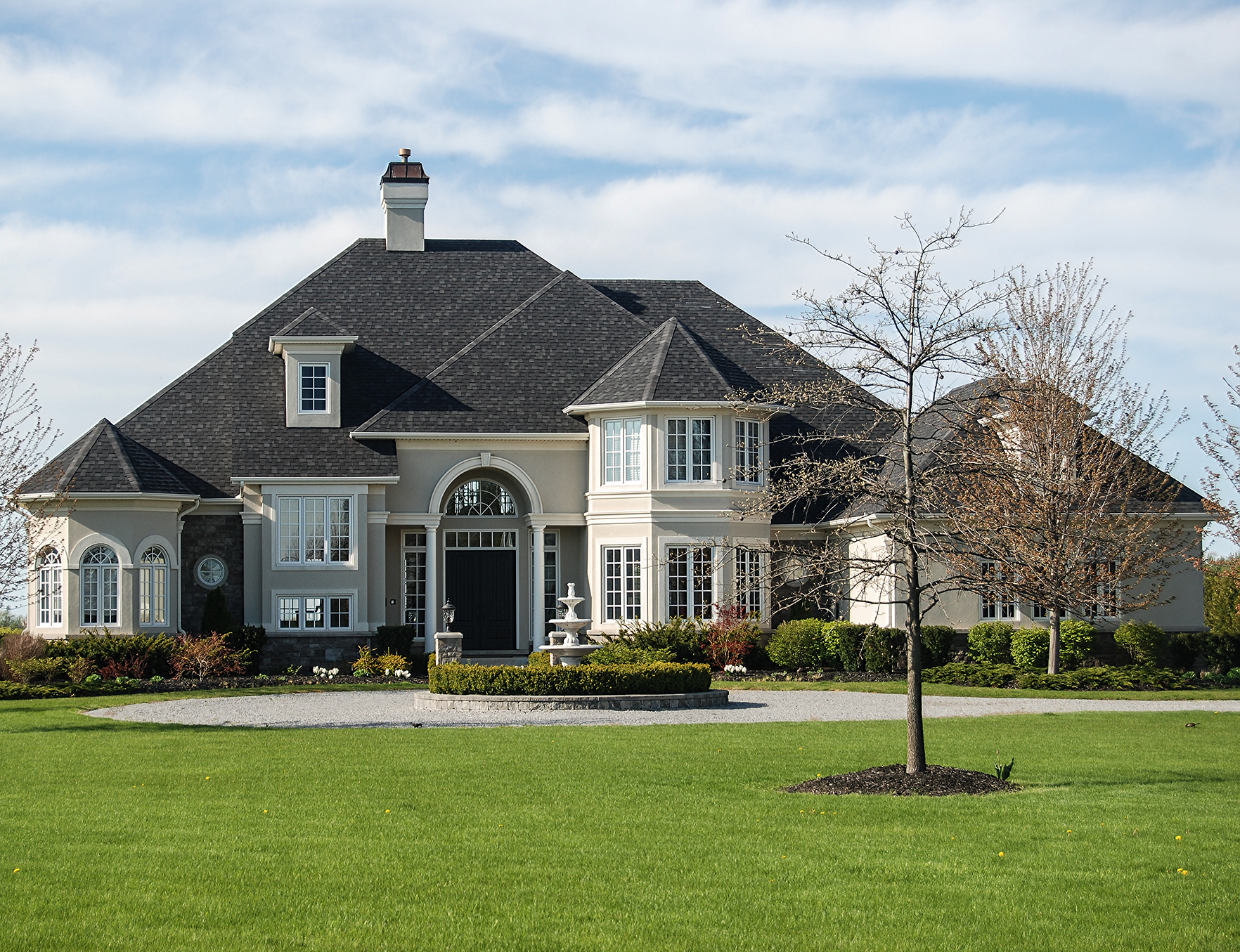 Often derided by architectural writers and experts, this style has nonetheless been popular. In both new and infill subdivision builds, its single large mass and vertical nature lends itself to being built right to the lot set-backs. And, the design’s use of various cladding materials on a single house can be cheaper than full brick veneer. High-pitched complex roof forms which can be extremely complicated, and may have discontinuous roof ridges, are universal. The house is usually built as a single massive structure with a tall (1½ - 2 storey), often arched, entry feature that includes a window above the door. Wall and roof dormers are typical with the latter frequently deployed simply to add roof complexity. Window sizes and shapes can vary widely on the same facade, often including arched and/or porthole forms. 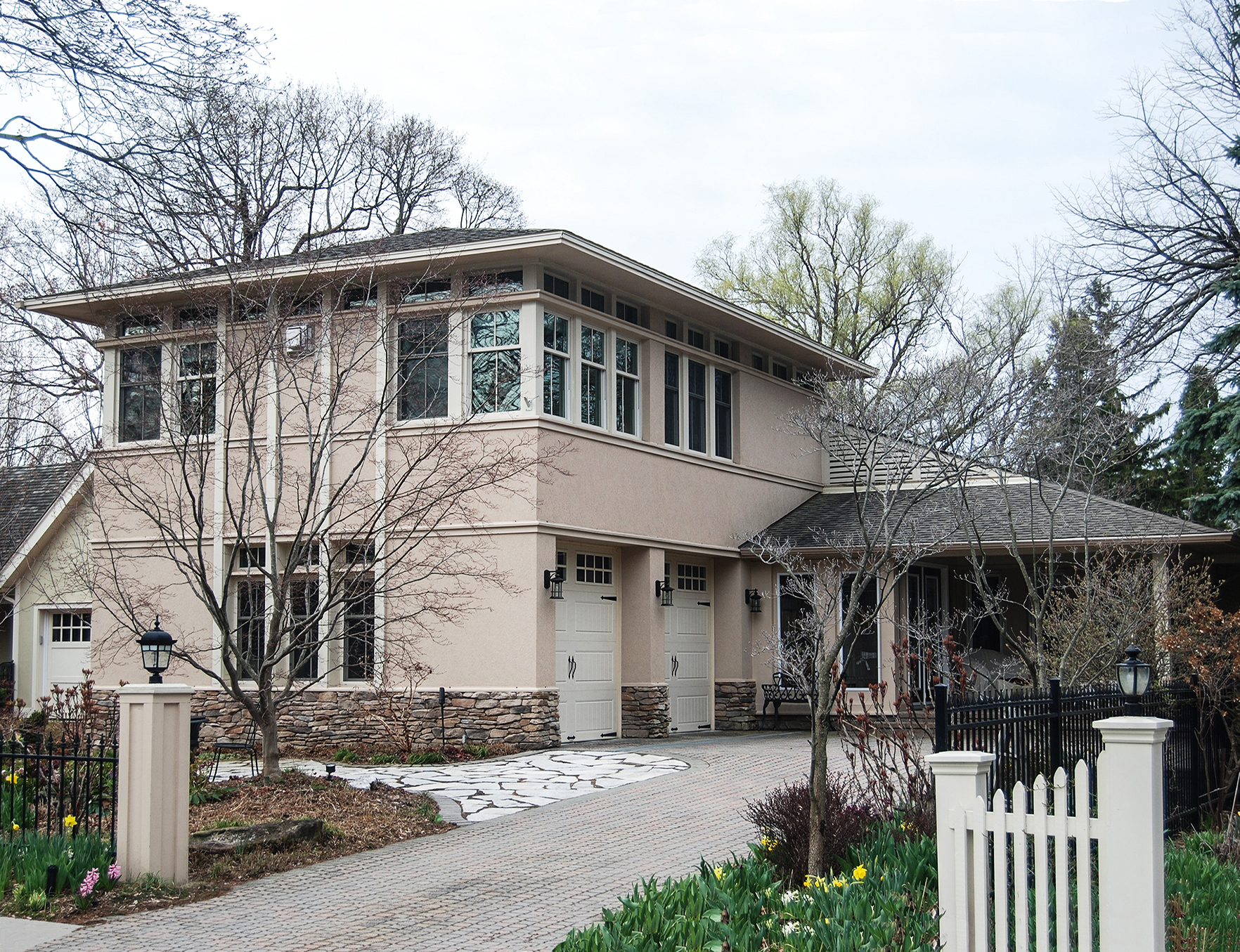 New Traditionals are usually based on design styles of the early 20th century (Eclectic, Prairie & Craftsman), although occasionally may follow Victorian or Romantic forms. While experts who work in this style can (and have) design a home virtually indistinguishable from period houses, it's far more likely that these architects would create a home that is immediately recognizable as, but subtly divergent from, the original form. This example is based on the asymmetrical hipped-roofed Prairie style (Compare: New & Period). With its banked & corner windows under fairly wide eaves, the architect has muted horizontal & vertical elements with effective use of shadow defining the former and complementary coloration of the stucco & trim on the elevations; all contrasted by the stone water table. Note the obscured entry in single story extension, both of which speak directly to many original Prairie designs. 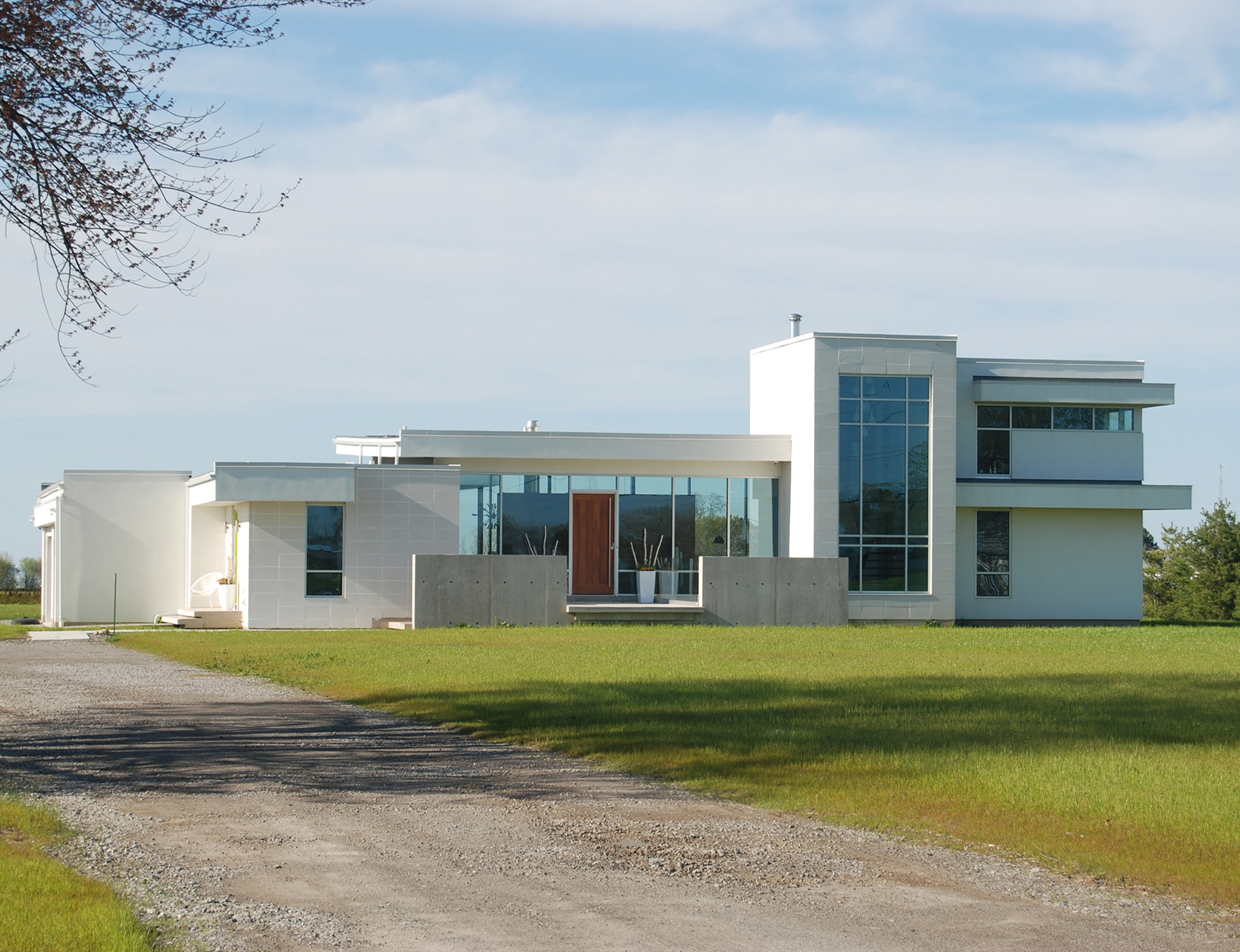 The ever-increasing sophistication of computer programs like CAD and CAM has given architects an unprecedented opportunity to create a conceptual design, ‘see’ it in 3-D, make rapid modifications and even test the engineering parameters. These tools established the conditions which allowed a ’style of experimentation’ to develop: 21st Century Modern. Even though this style’s defining elements may be ’subject-to-change’ while architects continue to explore creative possibilities, we suggest that most designs are rooted in the International Style with consistent divergent elements that include: walls or roofs that may be curved or canted; claddings, of two or more types, that may include glass, metal, concrete, stucco, wood, stone, etcetera; three-dimensional patterning on the facade(s); and more. Illustrating this, our example shows 5 materials on the facade which work together to subtly accentuate the front entry; a canted roof on the central massing; and three dimensional relief effect across much of the facade.

To continue your exploration, you may make a specific selection from the Menu; or, click on a decade in the Timeline to visit a style popular in that period; or, choose another of our Main Sections from the following...

Should you have finished your exploration for now, please re-visit the Guide when you get a chance. It is a "living" reference that will grow and expand as we find additional historical treasures or architects move the frontiers of design to new levels.