Innovation exploded during the Industrial Revolution. Between 1785 and 1914, Niagara eagerly adopted at least twelve distinct architectural styles. With so many options, those building a new home would often incorporate features from various styles into a single house, and older homes were commonly remodelled with the “latest” style elements. As a result, examples of pure forms are now relatively rare and even experts can be challenged to correctly classify the style of many of our historic houses. 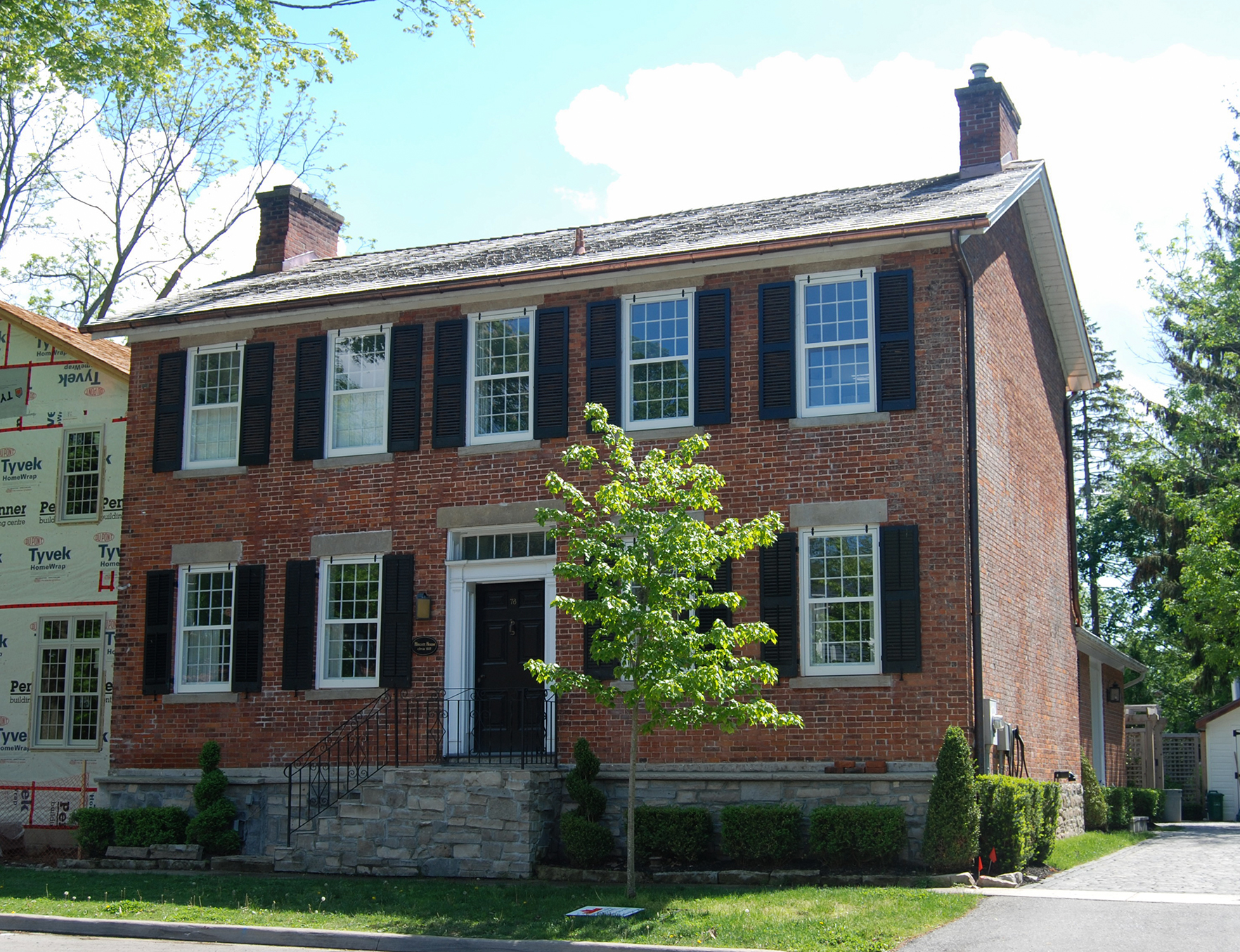 Characterized by clean, uncluttered lines, Georgian architecture was developed in England during the 18th century. With a form based on classical rules of proportion and balance, Georgian buildings radiate a sense of solidity and decorum.

The “classic” facade is a five bay symmetrical with a central door and two windows on each side; the five windows on the second floor are directly above the lower openings. Windows are double-hung, generally 12 over 12 panes with very little or no decorative surrounds. The front door is usually six panels and is equally unadorned; its transom, if any, is often rectangular and set with simple glass panes separated by muntins. The typical side (end) gable roof appears low-pitched with chimneys balanced on the end walls. 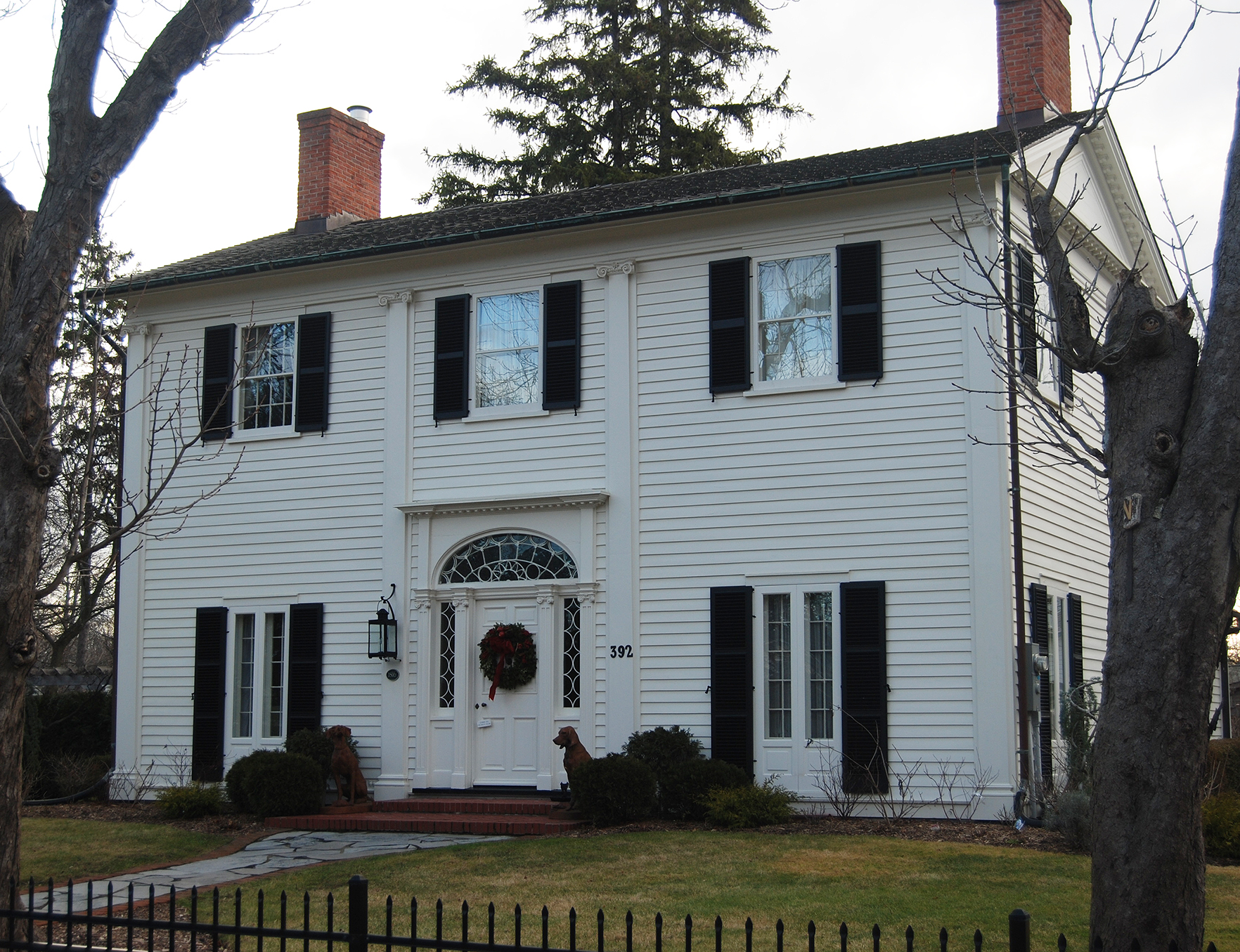 Spurred by late 18th Century Roman archaeological discoveries, polite society developed a fascination with classical forms and architects responded with designs that recalled Roman elements. Neoclassical houses retained the symmetry of the Georgian style but were more “dressed up”, particularly at the front entry. The Georgian 6 panel door remained but the central entrance was wider and more prominent. The door surround often incorporated sidelights and, budget allowing, a full width elliptical fan window sitting above a built up transom entablature usually supported by Ionic styled pilasters. The main entry of the circa 1816 home pictured is a textbook example of a Neoclassical entry tailored to both the successful owner’s pocketbook and scale of the house facade. A cornice entablature (which might, as in this case, include dentil moulding) was introduced on the still-popular Georgian low pitched side gabled roof and it commonly wrapped around the side walls to produce a pedimented end gable, reminiscent of a classical building. 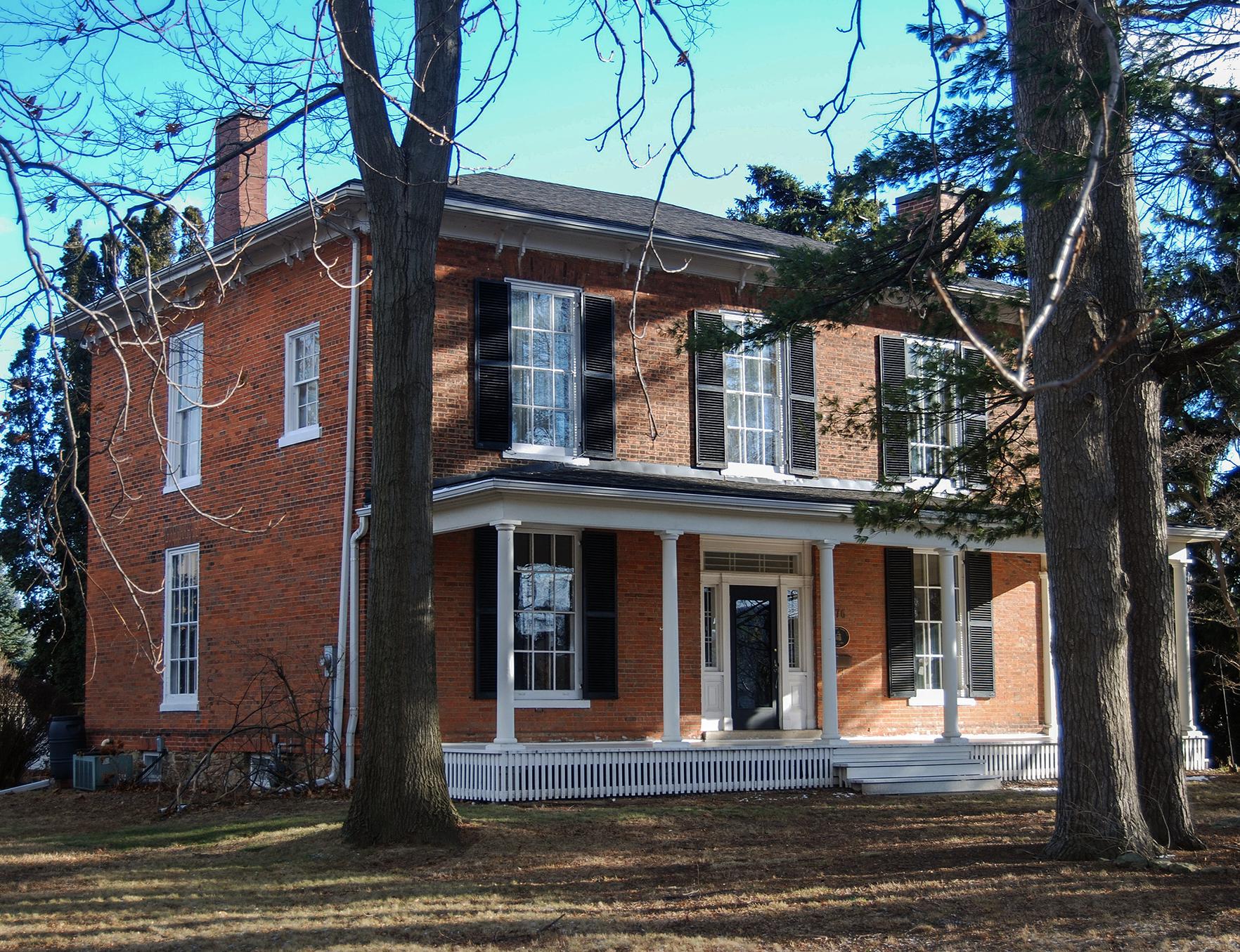 Georgian society’s emphasis on order and rationalism gave way to the emotion and individualism of the 1700’s Romantic movement which significantly influenced Regency architects. Regency homes were more “anchored” to the landscape, often set lower to the ground, and tending to be square or cube shaped, with tall chimneys rising from a low pitched hip roof. The most common facade was 3 bay with 6 over 6 double hung windows. The entry door was defined, with a surround of clean, elegant lines set with sidelights & transom. To accentuate the horizontal lines of the house & smooth the interior/exterior transition, a verandah (which could wrap the entire house) served by French doors was stylistically “the” elements to include if the budget allowed. 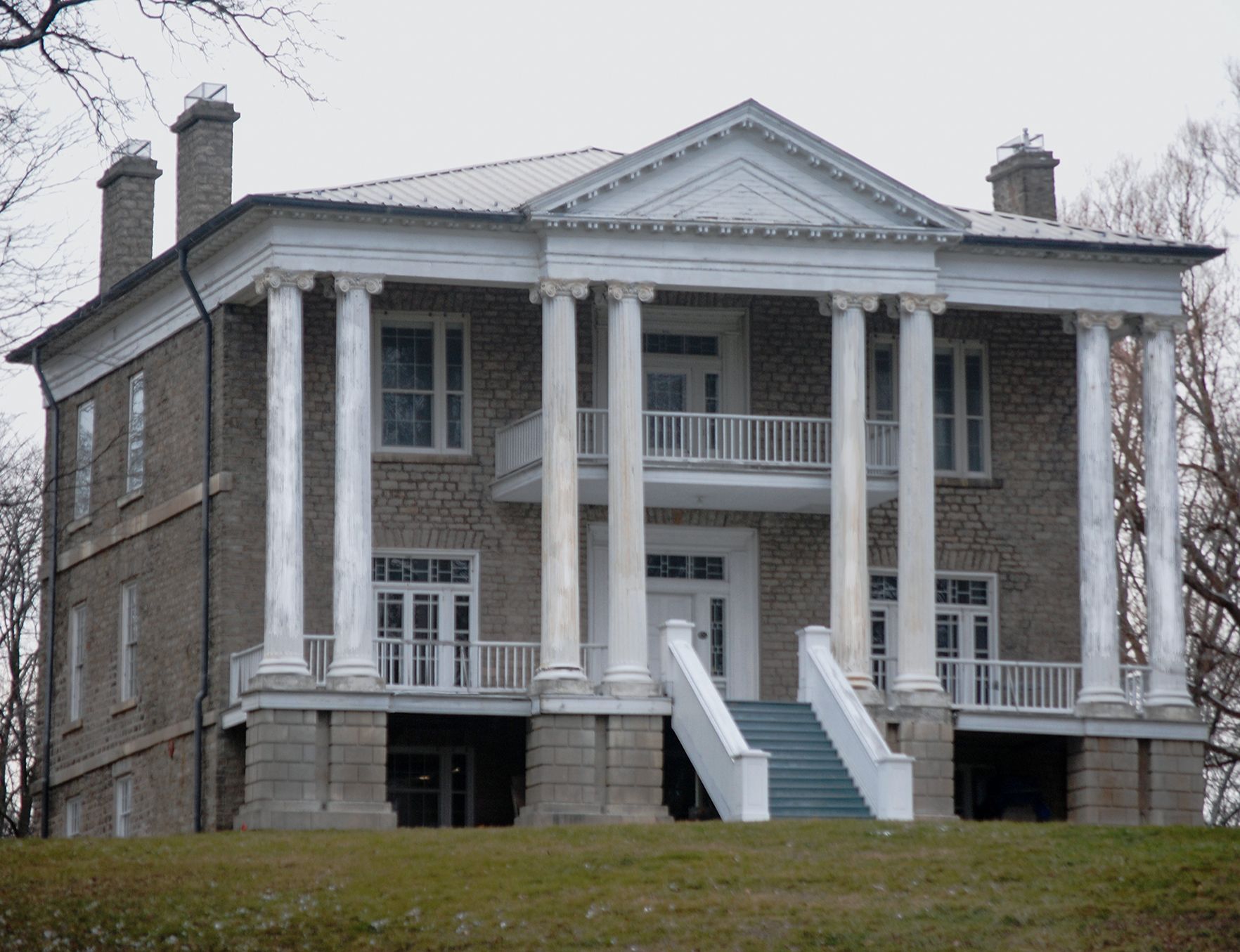 As time passed, the English Romantics judged Classic Greek architecture to be “purer” than the Roman forms that were the basis of Neo-classical style. Americans felt that the Greek Revival style coming from the ‘original’ democracy was the best reflection of their new Republic. Combined, these two factors led to the cross-Atlantic popularization of the Greek Revival style. The expression was most often seen in the ‘Monument’ or the more modest ‘Temple’ forms. Our Monument example shows the typical monumental scale, cubic shape and low-pitched hip roof of the form. Its recessed main entry has strong broad elements around the full-width transom and sidelights with pilasters carrying a built-up entablature. Commonly, Doric or Ionic (as in this example) columns rise to support a full height, full facade verandah or colonnade with a built-up but elegantly simple entablature wrapping the roof line. 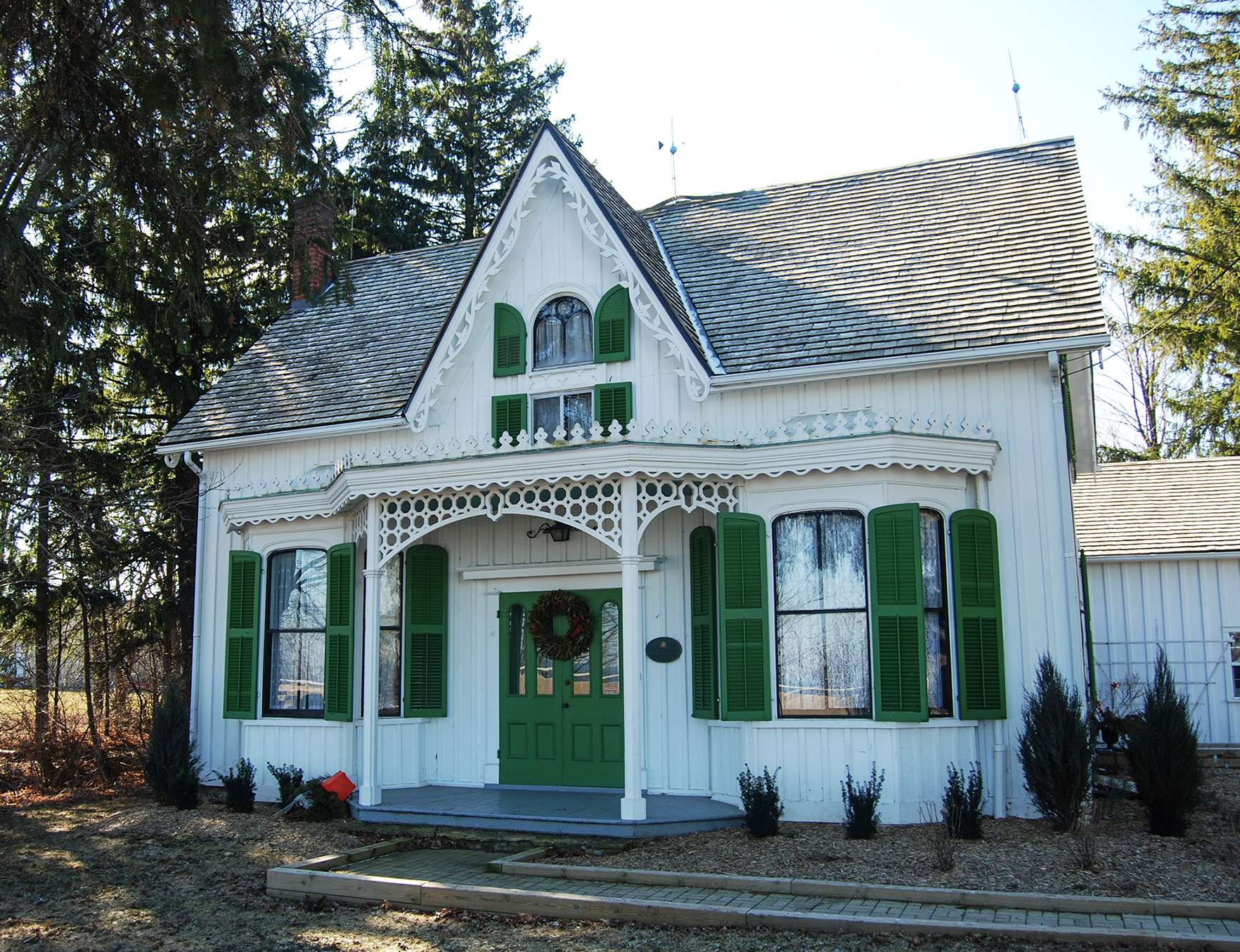 Possibly the most widely embraced style in 19th Century Ontario, Gothic Revival’s multiple forms, picturesque elements and decorative options found a place in every part of society. The ubiquitous Ontario Vernacular Cottage form was typically a modest-sized, one-and-a-half storey symmetrical gable end home with a tall pointed gable over its centred front door which was flanked by windows on either side. Often, decorative barge board would dress both end and central gables. In its Carpenter Gothic version, the cottage was usually clad with board and batten. In this example, the porch unites the two bay windows and the whole is enhanced by filigreed cornice with geometric grill work from bay to bay. 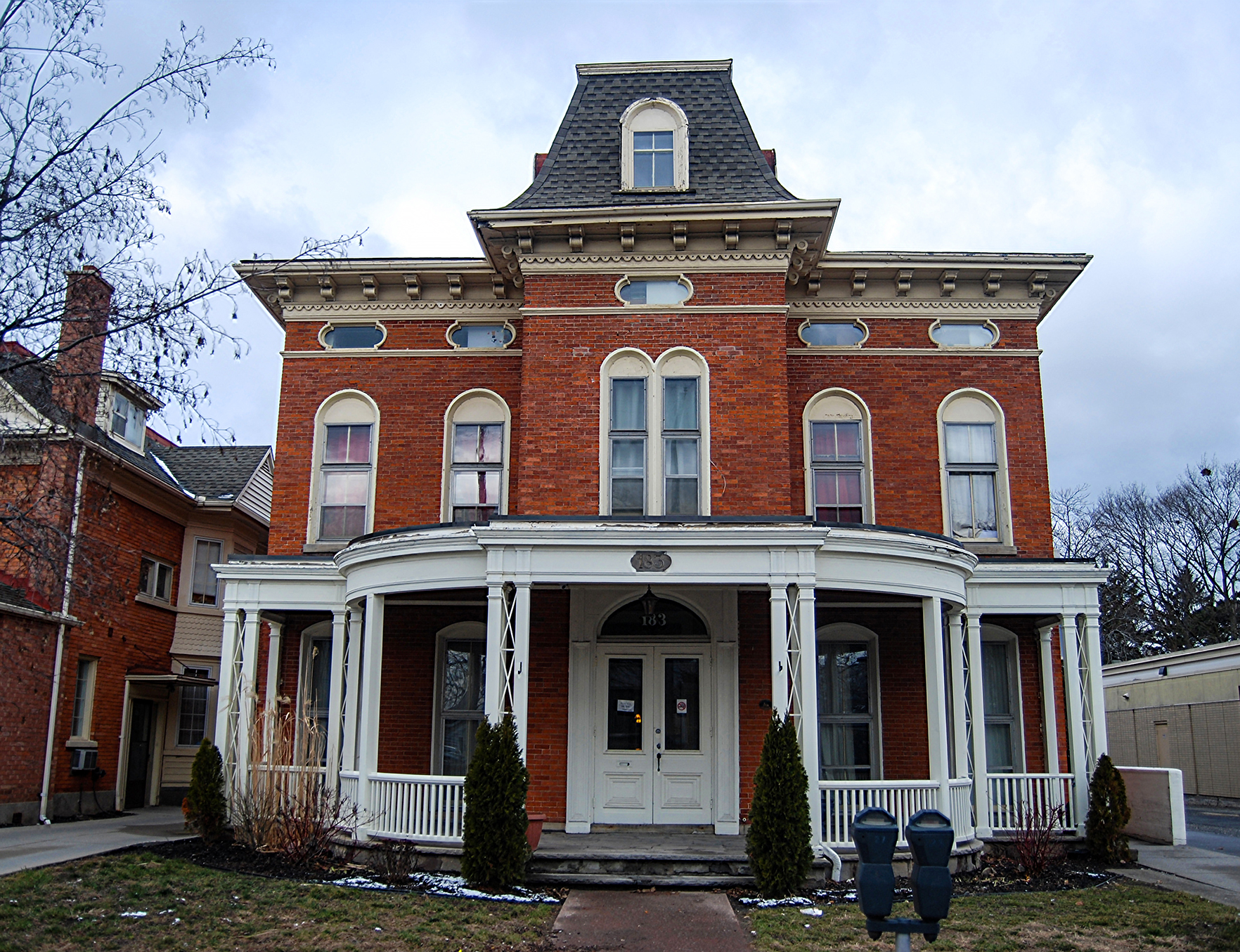 A style best described as “flexible”, Italianate houses would often contain re-interpreted elements from Tuscan architecture. However, since this was not a revival of a historical style, there was no requirement to copy past forms, follow rigid proportions or include any major stylistic element. The absence of rigid parameters allowed architects to respond to their Victorian clients' craving for ornamentation while enjoying creative license; both of which can be seen in the circa 1868 example. A symmetrical 5 bay Regency Tuscan form is appointed with arched window openings and a fanlight crowns the double front entry. Departing from the typical Italianate paired eave brackets, the designer has created a significant eave statement by using “beefy” single brackets on an ornamented entablature supported by a secondary banding trim which sandwiches elaborate oval windows and results in a unique but stylistically consistent presentation. 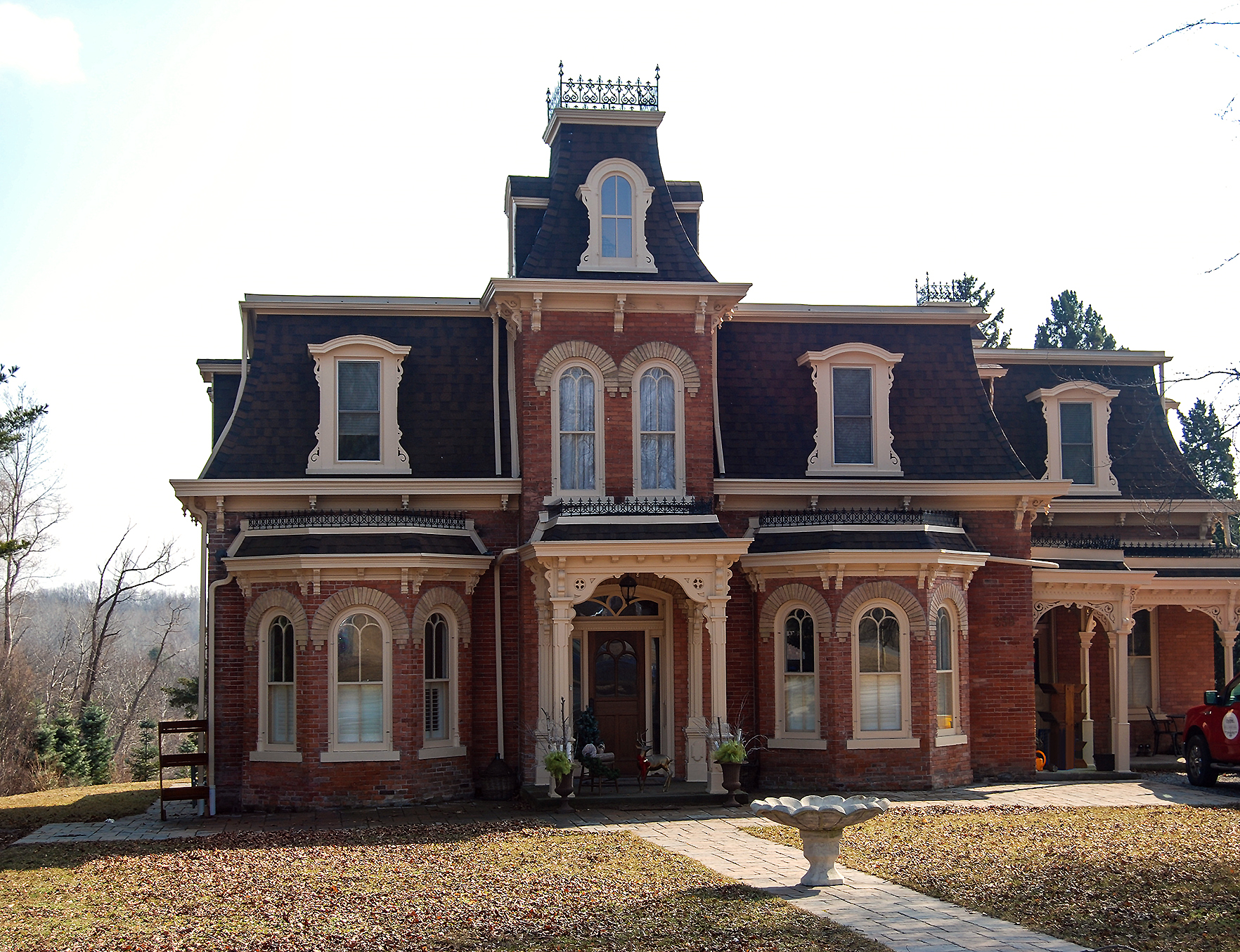 The style originated in France and then took a circuitous route through England and the USA before arriving in Niagara. Second Empire homes often incorporated Italianate and Gothic elements but the mansard roof defined the style. The mansard was a two-sloped hipped roof that created a full upper storey which was typically finished but still defined as an “attic” at a time when attics were exempt from tax. Almost without exception, dormer windows with decorated surrounds were set in the lower roof slope. In Niagara, over half of identified Second Empire houses possess a tower with paired windows. The circa 1880 example shows a symmetrical tower/entry placement with flanking bays. The segmentally arched main and pair of twinned windows sport contrasting buff brick voussoirs set proud of the wall to create hoods. The facade is unified by ornamental ironwork on the tower top, the bays, and across the embellished porch. 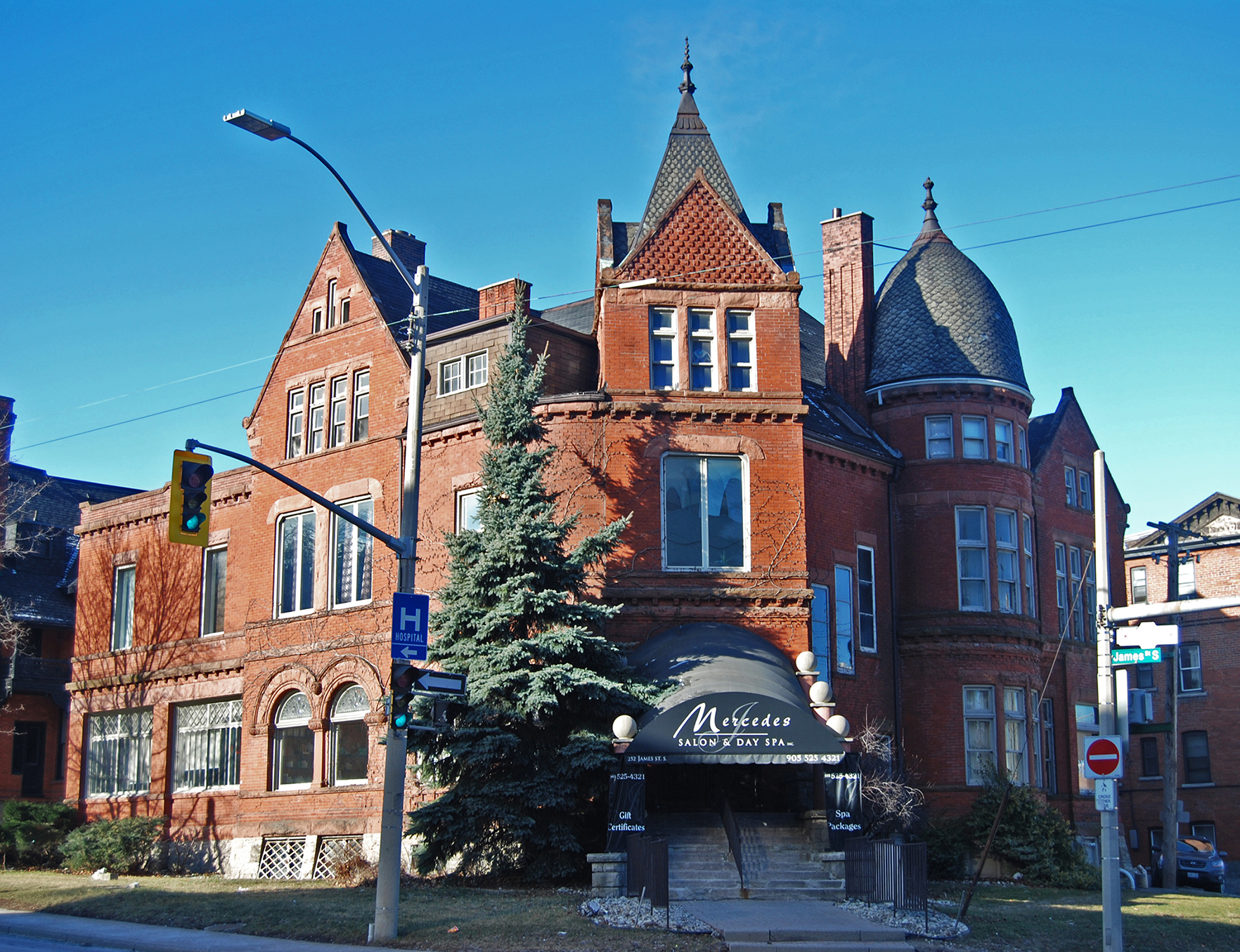 The Romanesque Revival began in Germany, but it was H.H. Richardson’s interpretation of the style which captured the attention of affluent North Americans. Richardson Romanesque is characterized by coloured rusticated ashlar stone in the foundations and building trim, massive stone/masonry walls, short brawny columns, dramatic round-arched recessed entries, towers, and bands of windows. A Richardson Romanesque home was normally the purview of the urban wealthy, for not only were these houses expensive to build, but the sheer number of highly skilled craftsman required tended to restrict its location to larger population centres where they could be found. Constrained by a modest corner lot, the example displays an intense presentation of towers, gables, roof lines, rusticated stone banding, carved and textured stone, and brick decoration. Inset shows the entry pre-awning.

Originating in England the style developed very differently in the USA. The English used rooflines, projection, clean trim and multi-paned, double-hung windows to produce the “decorated” house. The Americans deployed a plethora of ornate wood details and trim. In Ontario, the Queen Anne usually followed the American shape and form while using simpler, more conservative decoration. This 1886 asymmetrical, round-towered example illustrates the power of “simple”. Two front gable dormers sport corded texturing and bell-shaped stained glass windows. Hood moulds with contrasting brick elements decorate both two tall facade and the tower windows. The four-depth side gable is half-clad with arrow shingles coloured to echo the contrasting brick. The clean lines of the asymmetrical porch, supported by pillars resting on an integrated brick base, starts with a pedimented gable that both announces the main entry and echoes the roof gables, then curves around to finish at a single storey shingle clad bump-out effectively combine to unify the whole. 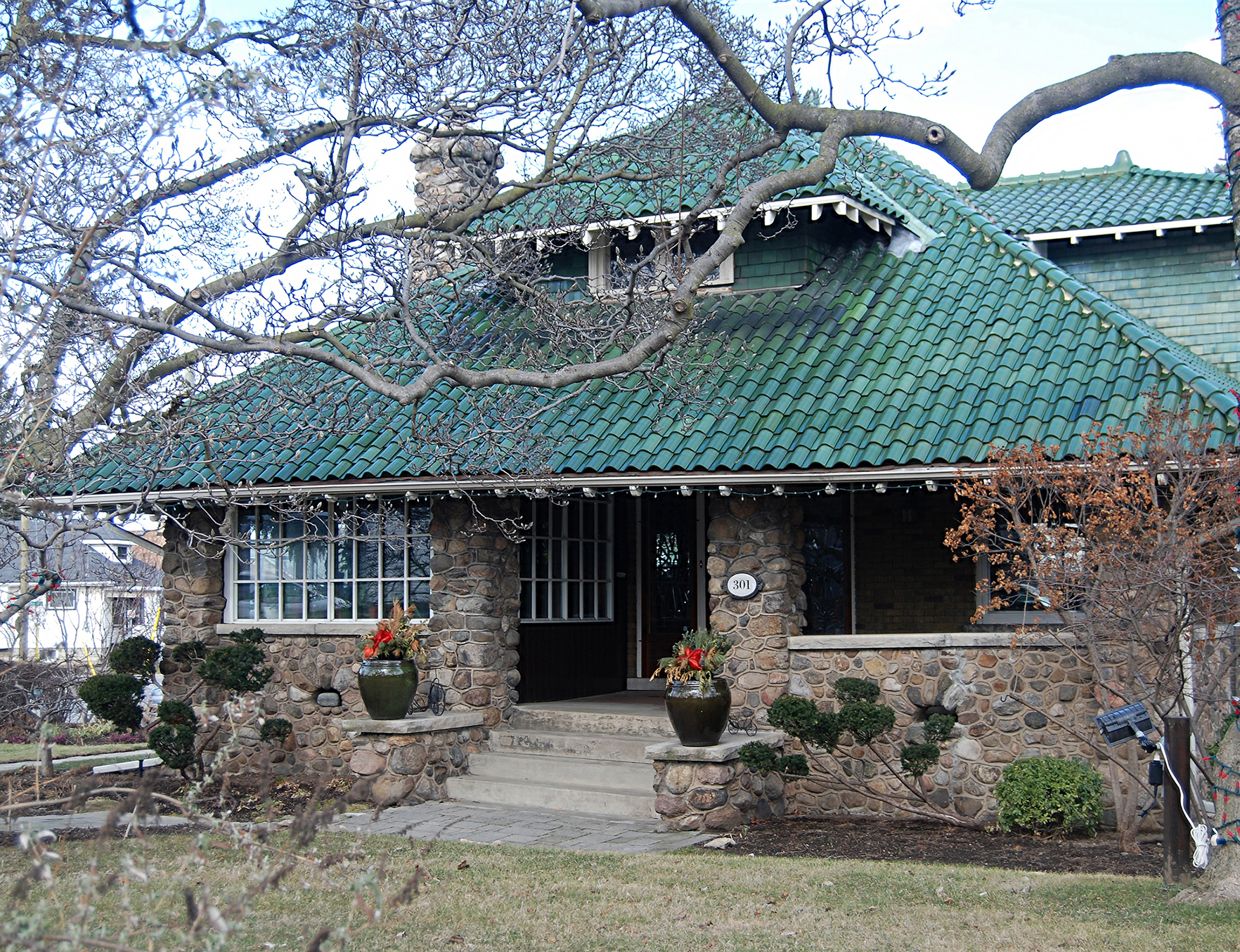 Born in a rejection of the Industrial Revolution, the Arts & Crafts style focussed on the relationship of the building to the land. It accentuated natural materials and earthy colours in handmade craftsmanship. English forms evoked a sense of the medieval, consistent with G. Jeykll’s landscaping designs. In the USA, the public was captured by the Craftsman bungalow form developed by the Greene brothers of California. An Arts & Crafts home, even in the rarer 2 storey form, will appear to hug the ground. Use of stone, stucco, earthy brick, clay tiles and rough-sawn lumber was common. In the Craftsman form a relatively low-pitched, central-gabled/dormered roof with wide eaves that often showed exposed rafters was typical. A commodious porch with square or tapered pillars, which might include an enclosed “sleeping porch” (as shown in this example), was a signature feature of Craftsman homes built off the Greene brothers' Arts & Crafts intrepretation.