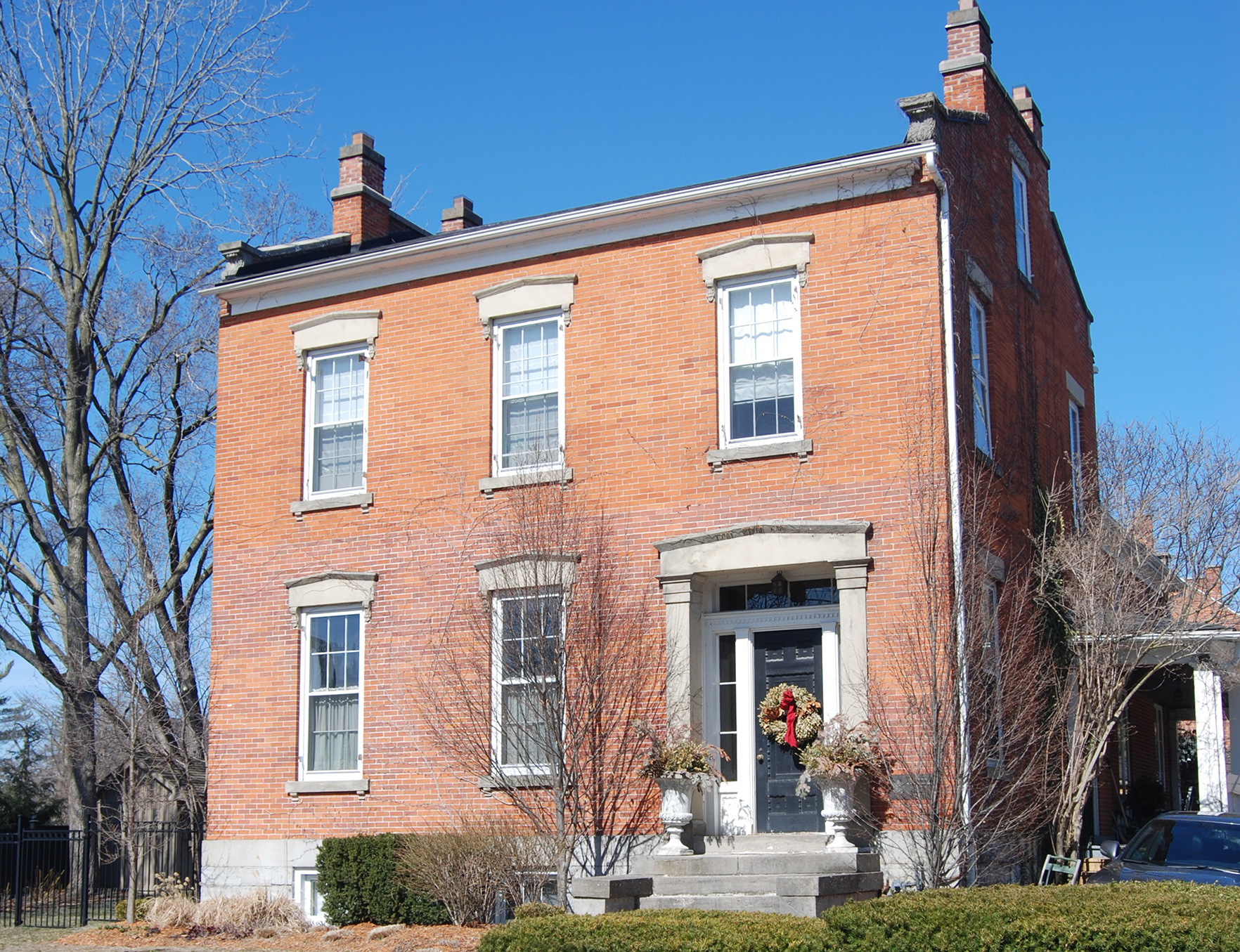 When this house was built in 1856, five styles were concurrently popular: Georgian, Neo-Classical, Greek Revival, Regency and Gothic Revival. Mixing of these distinct styles in a single house was commonplace, and this house is a perfect example. The building form with its parapet end walls, paired double chimneys, three bay asymmetrical facade and pronounced drip hoods above the openings is a Georgian type typical of many found in the Middle US colonies/states (e.g. Virginia). While on the facade, tall 6/6 double hung windows, a recessed entry with pilasters rising to a dentiled entablature which extends over door and sidelights supporting a rectangular paned transom, and finally the stone pilasters added to the classical design of the hood molds, all bespeak Greek Revival. In this case, it is the elements rather than the form which produce a fine Greek Revival presentation. Interestingly, a slightly later rear addition, with the exception of its end parapet wall, is completely of the Regency style.

<<< Back to Greek Revival Main 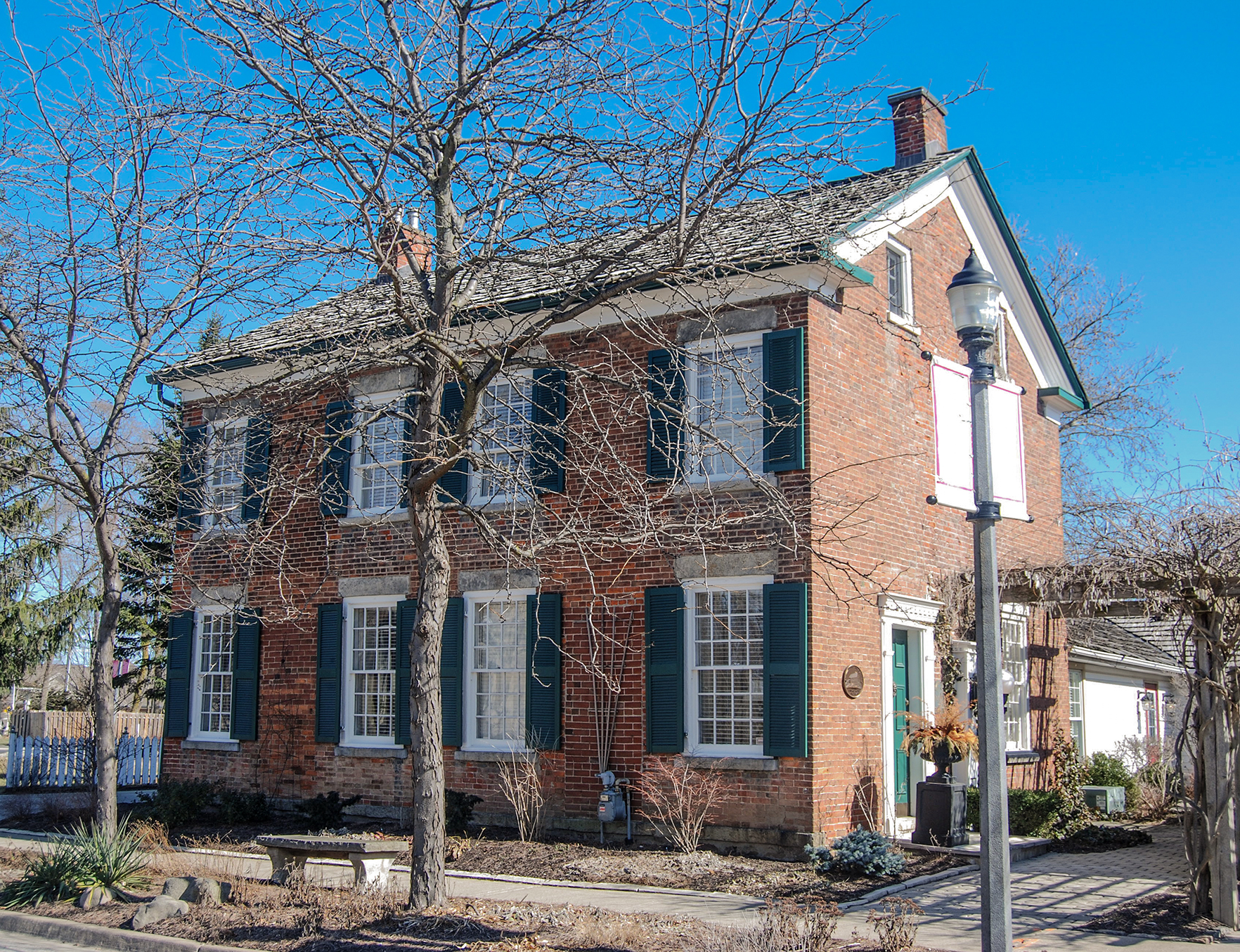 The Greek Revival temple form was a far more understated expression than its monumental sister. Unfortunately, due to its elegantly unadorned lines, the form has often been the subject of period renovations (see image below). A Temple presents a gable end to the road as its front facade. This facade is normally simple; in this ca. 1840 example pierced only by an asymmetrically placed entry door bracketed by pilasters supporting a dentiled entablature, a single double hung 12/12 window which is capped by a classically clean lintel and two small windows tucked high up in the gable. As is typical in the temple form, the sidewalls hold the majority of the windows. The broad, undecorated eave molding wraps the gable end with returns that, combined with the raking eave molding, suggest a pediment. Originally, the facade likely faced a street or laneway that has since been removed.

<<<Back to Greek Revival Main 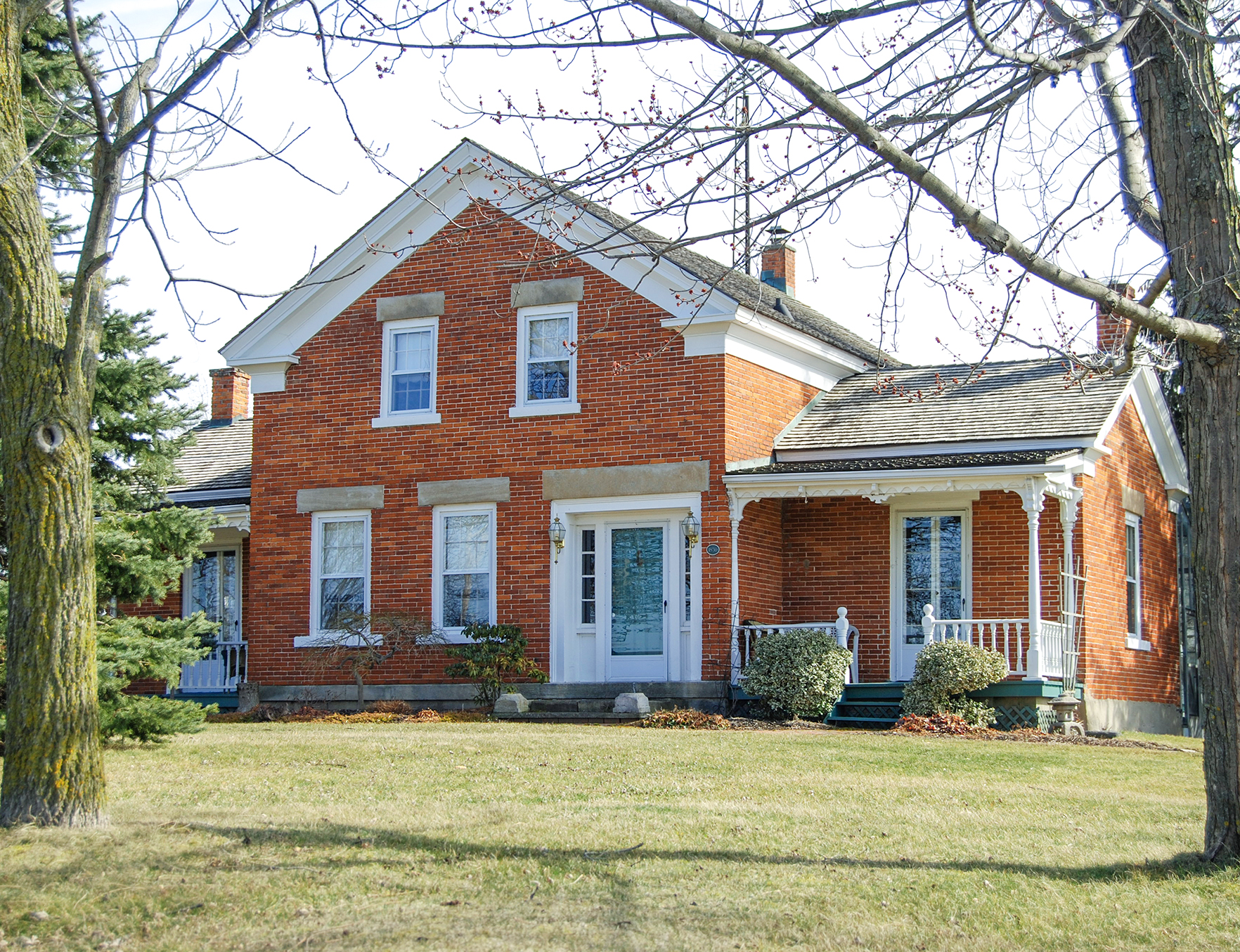 For those who wished to build in the ‘latest’ style but lived in a conservative community, the Temple form could be embraced. If the lot size allowed, the front facing gable of this form lent itself to wings on the sidewalls. In this ca. 1830 example, the asymmetrical centre massing with its strong entry, limestone lintels & watertable combined with the simple entablature is definitively a Greek Revival design. Are the wings original? Possibly… since, with the exception of the Gothic Revival detailing on the verandahs, the overall composition is stylistically apropos, the main elements consistent while the brick field is continuous, clean & uniform. Imagine these wings with verandahs detailed with a simple entablature echoing that on the eaves supported by correctly scaled classical columns to envision a complete Greek Revival Winged Temple statement.

<<< Back to Greek Revival Main