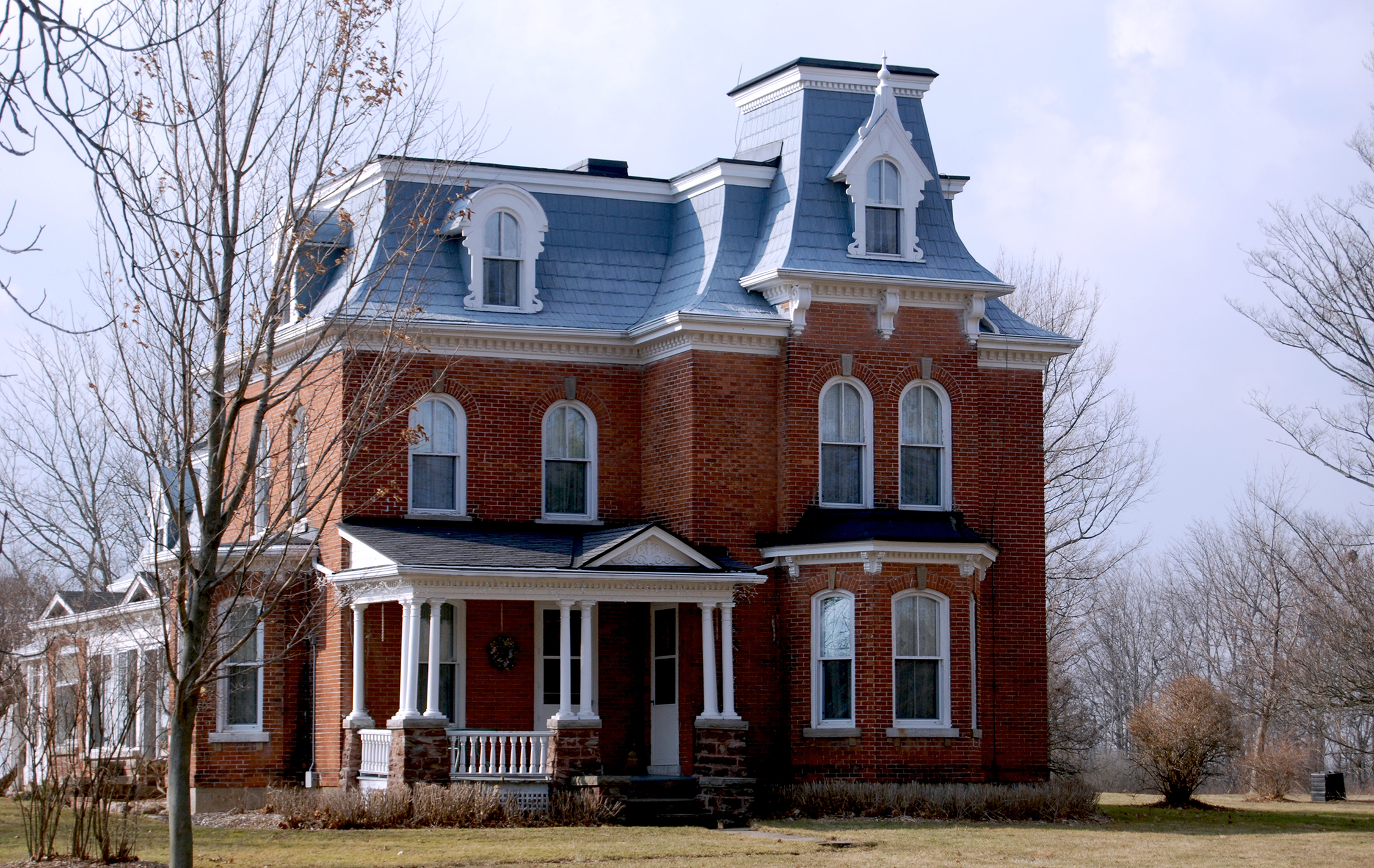 Occasionally, the lines and proportions of a house combine to produce a result which can only be described as elegant. Such is the case, on this stunning Second Empire home. Built circa 1870, the unbroken vertical lines of the asymmetrical red brick home draw the eye upwards to the slate blue mansard roof that crowns the building. The large dentils of the deep eave molding and the broad, clean expanse of the roof ridge cornice combine to accentuate the concave curves of the mansard. Semi-circular two over one windows are used throughout the house; the dormer windows emphasized by the white decorative surrounds while on the facade the windows are punctuated by rusticated keystones. The bay window, set in a projecting wall section that rises to break the main eave line is capped with a distinct roof section that is pierced by a gable dormer topped with a graceful finial, taken together creates the impression of a tower. While the Neo-classical pedimented porch may, or may not, be original to the build, its Spartan elegance marries very well with the overall presentation. 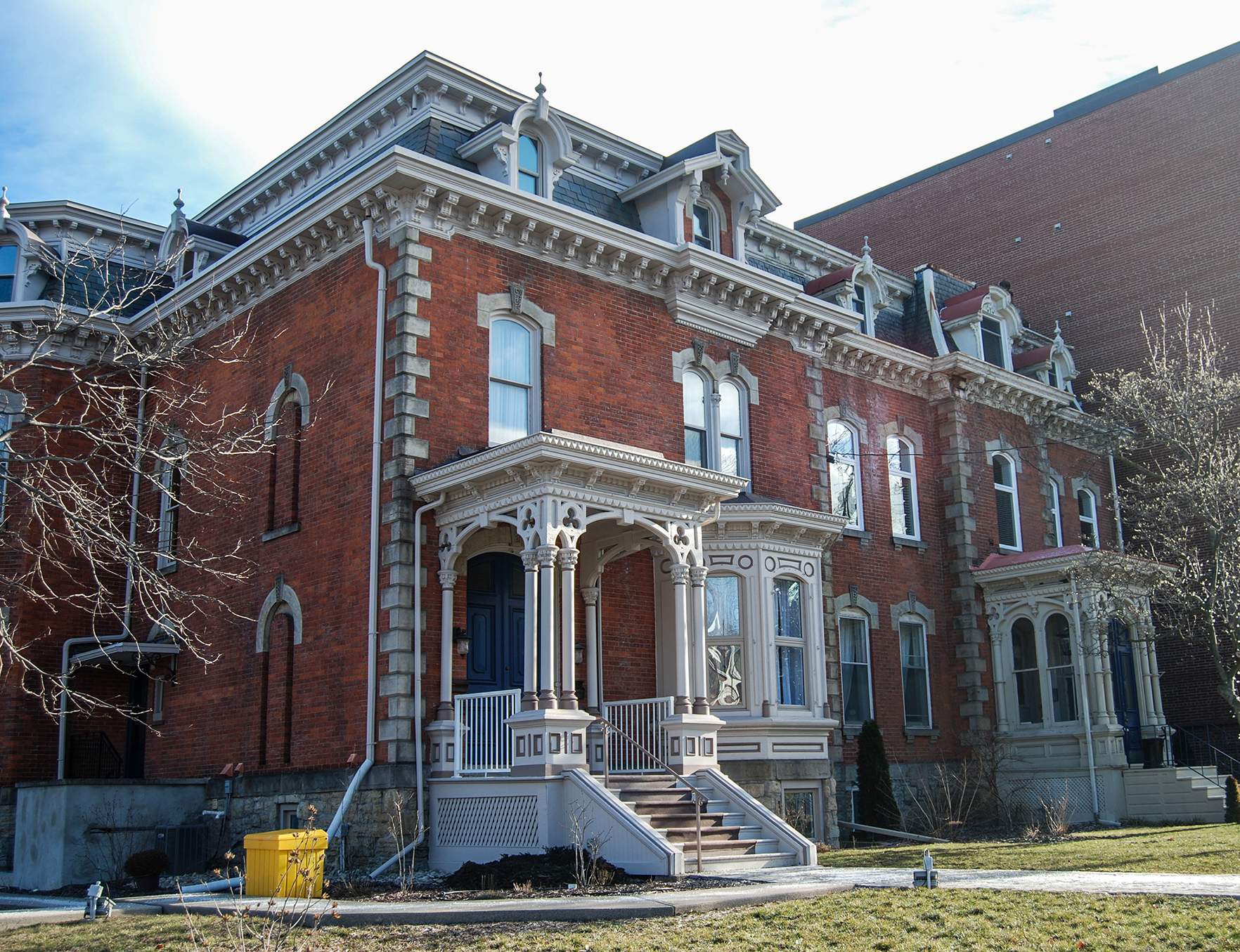 Originally a symmetrical three townhouse terrace, this building suffered the amputation of one-third its structure by the builder of an apartment block. Despite ruining the building’s balance, the remaining two houses maintain a courtly presence unified by the classic Mansard roof; its concave curves set-off by highly decorated eave and roof-ridge cornices. The slate roof tile field is broken by dormers with semi-circular arched windows framed in elaborate decorative trim. The facade is defined by beefy eave brackets, stone quoins and heavy water table. The segmentally arched single and paired windows are emphasized by stone drip molds and incised keystones. The porch on the left house and the prominent frontispiece on the right house sport columns with Corinthian capitals overtopped by trefoil decorations that lend a hint of Gothic to the decoration. Finally, the heavily ornamented bay window works to both balance and actuate the frontispiece of the neighboring house. When built, the now missing third house would have been a mirror image of the house on the left end, creating a perfectly balanced grand terrace. 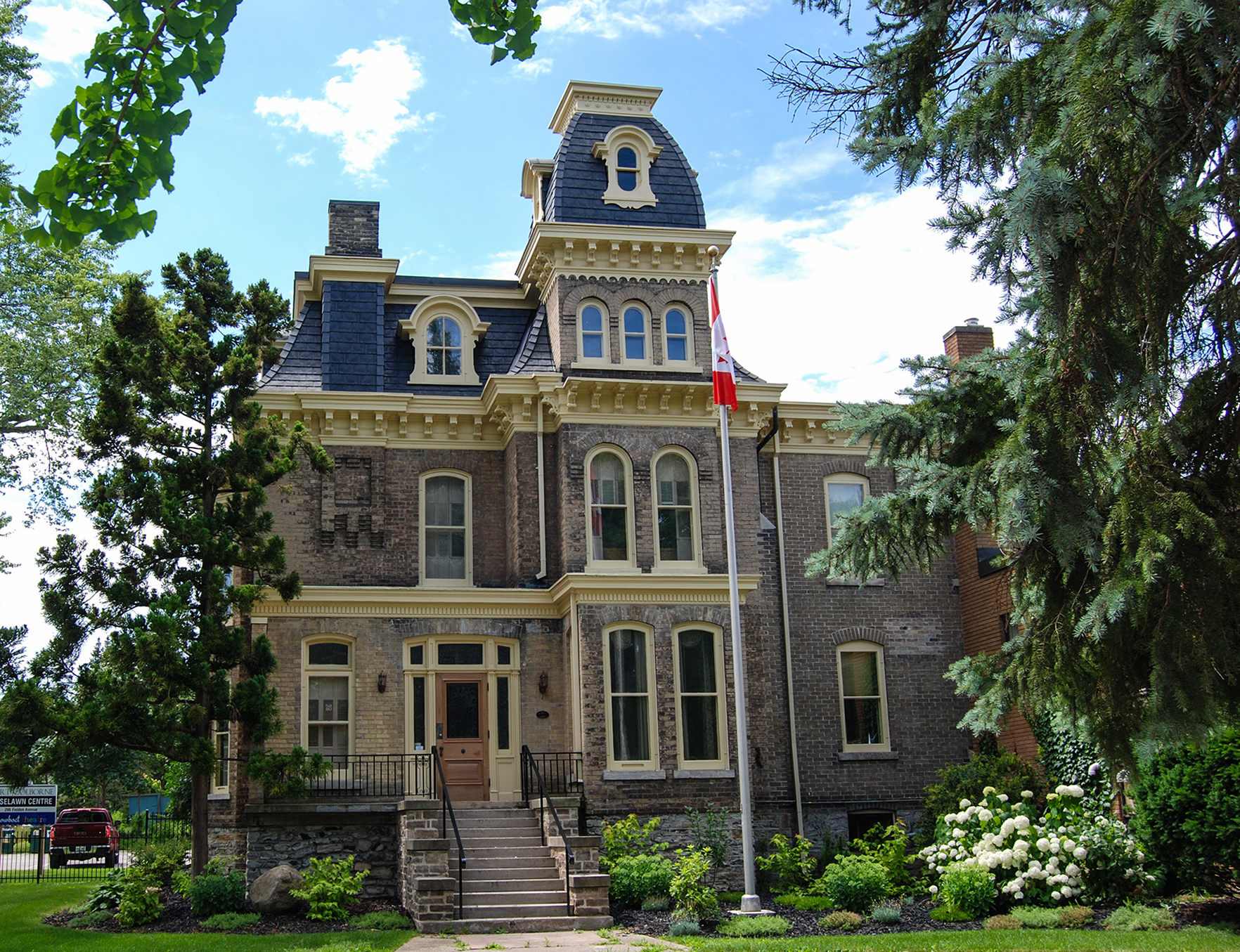 While the original house on this property was built in 1860 by Levi Cornwall, it is to Lewis Carter that we owe the home’s Second Empire styling. Described in heritage documents as having been “re-modelled” in 1879, our evaluation suggests that Mr. Lewis may have followed a common practice of the time by substantially adding to the original footprint of the house on at least three sides essentially ‘burying’ the smaller building within the new structure. The result is an impressive and stylistically correct Second Empire home.

Displaying a typical concave Mansard roof, the tower is capped by a more unusual convex roof silhouette. Ornate brackets sit below the eaves, while semi-circular and segmentally arched windows are used on every facade. The drawing below shows the home prior to the enclosure of the main entry and the mid-20th century addition stuck which is like a barnacle to the right end of the building. 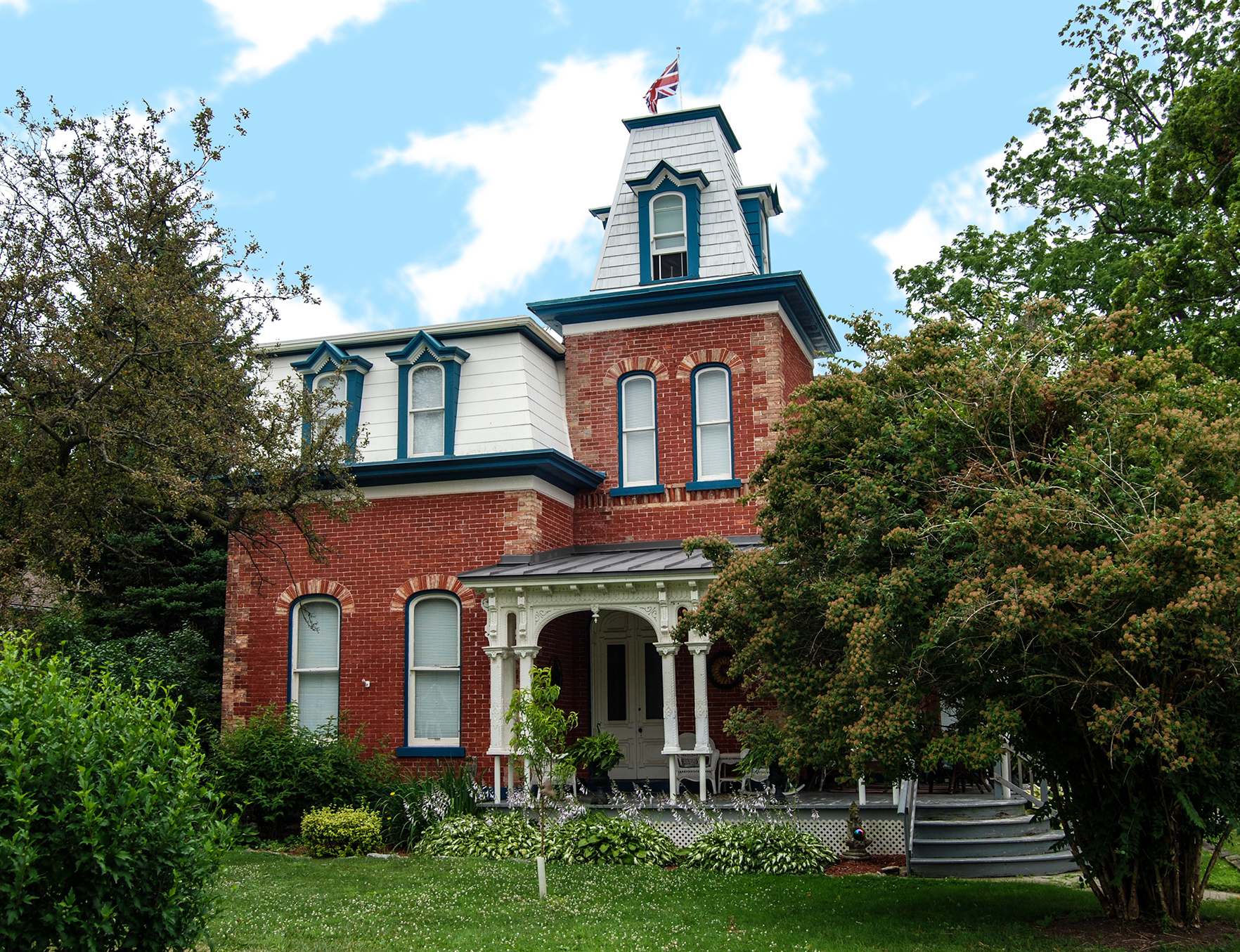 Fresh from completing the Second Empire build of Roselawn, Eber Cutler built this home for his employee and protégé, James Morin; who later became a Member of Parliament for the region. One of the earliest brick veneer over wood frame homes in Niagara, this home displays a straight-with-flare mansard roof which drops down to heavy, projecting eaves; the fascia still bearing slight shadow evidence of brackets (likely modillions) that have been lost to time. While the dormer surrounds are minimalist vertically, each possesses a strong peaked hood set above a segmentally arched window. The asymmetrically placed main entry in the base of the tower, boasting both arched top and double doors, is shaded by a deep, decorated porch replete with paired pillars, brackets and modillions. Dichromatic treatment of the red brick field dresses the house, with the buff brick voussoirs, quoins and string course (with alternating insertions of red brick in its 45˚ soldier-set course) providing both contrast and serving as a fine example artistic masonry from the second half of the 19th Century.

While the loss of the modillions from the eaves and the missing brickwork below the porch pillars does detract from the ‘as-built’ composition of this house, it remains an outstanding testament of a 19th Century Second Empire home built for newly emerging middle class.